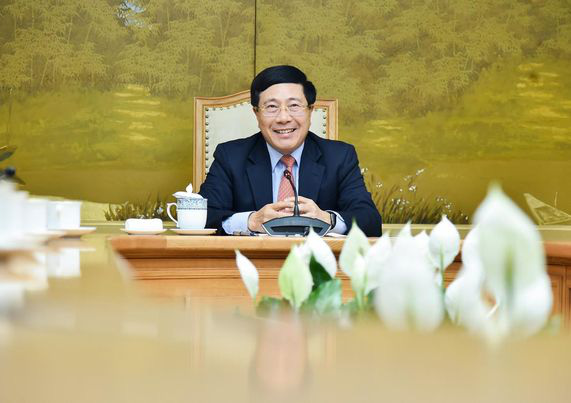 The two officials agreed that the Vietnam-U.S. comprehensive partnership has been growing positively in all spheres, bringing practical benefits to their peoples and contributing to the maintenance of peace, stability, cooperation, and development in Asia-Pacific and the world.

They agreed to enhance cooperation in order to further deepen bilateral ties on the basis of respecting each other's independence, sovereignty, territorial integrity, political regime, and mutual benefits.

Deputy PM Minh welcomed the commitments of U.S. President Joe Biden’s administration and its move to promote global efforts to cope with climate change, including Washington's re-entry into the Paris Agreement on Climate Change.

As one of the countries hardest hit by climate change, Vietnam, with strict policy and high political determination, has been supporting international commitments and working closely with other nations to deal with challenges related to climate change, including boosting ties with the U.S., he said.

U.S. Special Presidential Envoy Kerry affirmed that his country will continue to treasure its comprehensive partnership with Vietnam, and will enhance cooperation to assist developing nations, including Vietnam, in coping with climate change.

Under President Donald Trump’s administration, the U.S. withdrew from the Paris Agreement on Climate Change on November 4, 2020.

Adopted in 2015, the Paris Agreement sets out a global framework to avoid dangerous climate change by limiting global warming to well below two degrees Celsius and pursuing efforts to limit it to 1.5 degrees Celsius.

It also aims to strengthen countries’ ability to deal with the impacts of climate change and support them in their efforts.