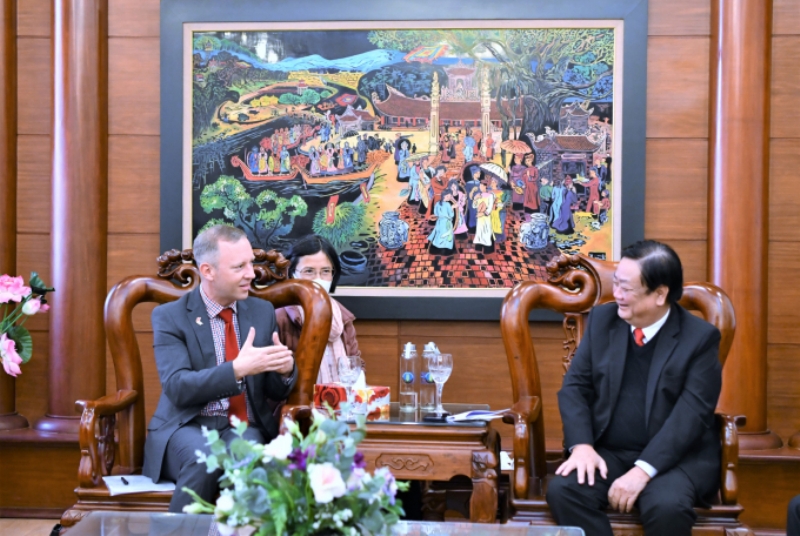 Vietnam has appealed to the UK for assistance in applying new agricultural technologies and methods, according to Minister of Agriculture and Rural Development Le Minh Hoan.

Vietnam and the UK do not overlap in their agricultural production and that lack of competition has given way to a culture of bilateral support that enables both to enjoy the other’s specialties, Minister Hoan said.

He also touched on livestock production, noting that Vietnam facilitates animal quarantine activities in line with agreements that benefit farmers from both countries.

During the meeting, Hoan appealed to Ward for continued UK support in securing equipment and improving Vietnam’s animal quarantine capabilities in order to boost the qualities of local animal quarantine activities.

Minister Hoan said the European Commission (EC)’s imposition of a 'yellow card' warning on IUU fishing against Vietnam’s seafood exports to the EU since 2017 has caused great damage to Vietnamese fishermen and the economy as a whole.

He noted that Vietnam has an over-3,000-kilometer coastline.

The Vietnamese government has been improving relevant legislation to turn traditional and spontaneous fishing practices into well-organized fishing operations that work in alignment with international regulations and commitments related to environmental and ocean protection.

The installation of cruise surveillance devices on fishing vessels to ensure they do not violate foreign waters, as well as to trace the origin of seafood, is currently being carried out in Vietnam in accordance with the country's road map, the minister said.

“Such actions not only aim to have the EC remove the ‘yellow card’ warning for Vietnam, but also reflect the nation’s responsibilities to the international community for preserving marine biodiversity and protecting aquatic resources for future generations,” the Vietnamese official said.

The minister also expressed his wish that the UK, a leading country in the application of science and technology to fishing, forestry, and animal husbandry, will promote cooperation and exchanges between the two sides in order to help Vietnam access and apply new technologies in these fields.

British Ambassador Ward expressed his excitement in seeing the two countries maintain close cooperation despite the impacts of the COVID-19 pandemic.

Such cooperation has paved the way for the development of the general economy, as well as both countries’ agriculture industries.

“I still remember the good impressions I had during my previous visits to national forests in Vietnam," Ward said.

"The forests of Vietnam have great potential for ecotourism development that will bring great benefits to people.”

The ambassador also affirmed that the UK will continue to provide training for Vietnamese stakeholders in tracing timber origins and creating opportunities for local farmers.

In the field of animal husbandry and veterinary medicine, the ambassador hopes that Vietnam and the UK will keep cooperating and exchanging information so as to prevent the spread of domestic animal diseases.