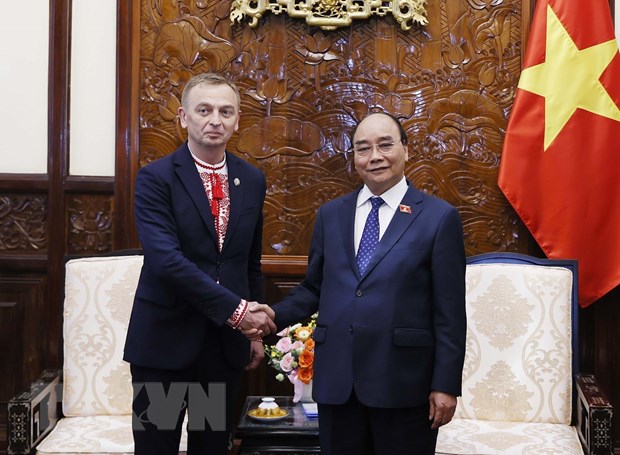 Leaders of the Vietnamese state, government, and National Assembly sent congratulatory messages to their counterparts in Ukraine on Wednesday on the occasion of the European country’s 31st Independence Day.

In honor of the occasion, Minister of Foreign Affairs Bui Thanh Son also sent a message of congratulations to his Ukrainian counterpart Dmytro Kuleba.

Vietnam and Ukraine established diplomatic relations on January 23, 1992, nearly five months after the European country adopted the Declaration of Independence on August 24, 1991.

Vietnam opened its embassy in Kiev in 1992, while Ukraine opened an embassy in Hanoi in August 1997.

After 30 years of diplomatic relations, the two nations have extended cooperation to the fields of politics, diplomacy, economic matters, trade, military, and education.

In terms of defense cooperation, Ukraine is an important partner of Vietnam, according to the Vietnam News Agency.

The two nations set up their Defense Attaché Offices in Kiev in 1994 and in Hanoi in 2003 to promote relations between the two defense ministries.

In March 2011, Vietnam and Ukraine reached a comprehensive partnership and cooperation.

In 2021, Vietnam imported more than US$375 million of goods from Ukraine and exported nearly $345 million to Ukraine.

More than 7,000 Vietnamese were living, studying, and working in Ukraine before the conflict between Russia and Ukraine broke out on February 24.