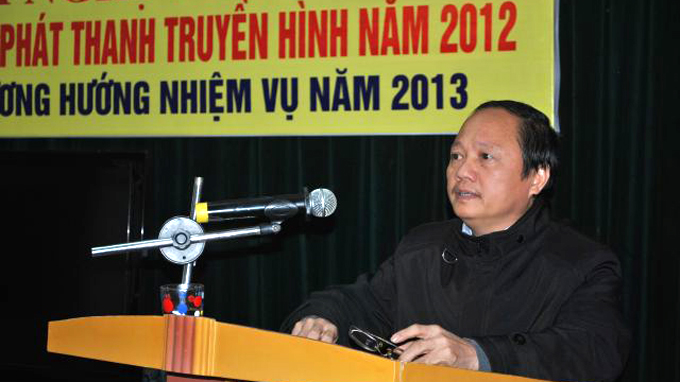 The director of the Thai Binh Province Television and Broadcast Station, Vu Anh Thao, has been suspended for 15 days for failing to provide timely information about the recent tropical storm that caused major damage in the province. The suspension was signed by the chairman of the northern provincial People’s Committee, Pham Van Sinh, on Tuesday, said Cao Thi Hai, one of the chairman’s deputies. “Vu Anh Thao is suspended pending investigation into his responsibilities in failing to provide timely information related to tropical storm Bebinca to the public,” the decision said. On June 22, the provincial Steering Board for Flood and Storm Prevention and Control and Search and Rescue met to discuss measures to cope with the storm, Hai said. Thao, a member of the board, was absent from the meeting and assigned one of his deputies to attend in his place. A few days later, the provincial authorities conducted an inspection of preparations to cope with the storm and discovered that the station had not released information about it. Hai said that this tardiness had affected the implementation of precautionary measures and evacuation plans ahead of the storm. The provincial People’s Committee has assigned the local Inspectorate to review the station’s plan for providing storm information to the public, and based on the inspectors’ conclusion, the provincial authorities will discipline Thao, Hai said. According to the above-mentioned board, during the storm, several sections of dykes in the province were knocked down, a ship sank, and about 2,500 hectares of fish, shrimp and crab ponds were submerged, causing a loss of nearly 3,000 tons of these sea animals. Total damage is estimated to be VND250 billion (US$12 million), not to mention the uncalculated damage to 2,100 hectares of oyster ponds. Yesterday evening Tuoi Tre tried to contact Thao by phone, but he did not answer. Thao is also a member of the provincial Party Committee and the chairman of the local Journalists Association. During Thao’s suspension that began on June 23, Vu Van Nghiem, one of his deputies, will take charge of the station’s operation, the provincial authorities said.