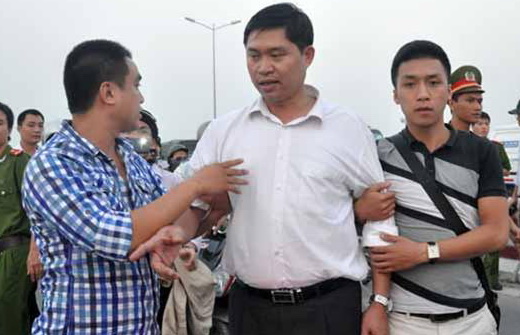 Five more patients of Dr. Nguyen Manh Tuong, who had thrown the body of a woman who died following a cosmetic surgery at his own beauty salon into a river, have been given checkups and hospitalized.

According to Dr. Nguyen Huy Tho, former head of Hospital 108’s Plastic Surgery Department, two of them had their nose bridge raised and thigh fat taken out at Tuong’s Cat Tuong salon and recently showed complications.

Tho added that he and his staff are willing to provide checkups and counseling to any of Tuong’s patients.

Despite the tremendous efforts by professional divers to search for the body of 37-year-old Le Thi Thanh Huyen, which was thrown into the Hong (Red) river by Tuong and his security guard, it remained nowhere to be found. Several who claimed to be psychics also offered help with the search but too failed to locate Huyen’s body.

The police and the victim’s family will expand the search scope to Yen Lenh bridge in Hung Yen province or even further, using both professional divers and nets.

Investigators also found that Tuong’s wife, who is also a doctor, did receive a call from him and learned of Huyen’s death. She persuaded Tuong to report the incident to the police, but he refused and dumped the body to cover up his crime.

According to the police, Huyen came to Cat Tuong salon to undergo a breast implant surgery on Oct. 19 morning. She was anesthetized by three nurses before being operated on by Tuong.

Following the surgery, Huyen had much difficulty breathing and started foaming at the mouth. The nurses injected her with some unidentified medicine, but her body soon turned blue. Tuong then gave her oxygen and other emergency treatment but failed to save her life.

To cover up the crime, Tuong instructed a security guard at his salon to leave Huyen's scooter far away from his salon. The two then transported Huyen’s body to Thanh Tri Bridge in Tuong’s car and threw it into the Hong River.

Huyen’s death has sparked concerns and outcry among the public about Tuong’s unqualified cosmetic surgery skills and worrying medical ethics. His beauty salon offered many cosmetic services which were not licensed by authorities and charged from VND30 to 60 million (US$1,442 to $2,845) each.

A few days after the incident, many similarly unlicensed facilities have been found operating in the capital. Many obtain licenses to offer skin care and makeup services only, not cosmetic surgeries.

The Ministry of Health has also ordered comprehensive inspections at all beauty shops nationwide.