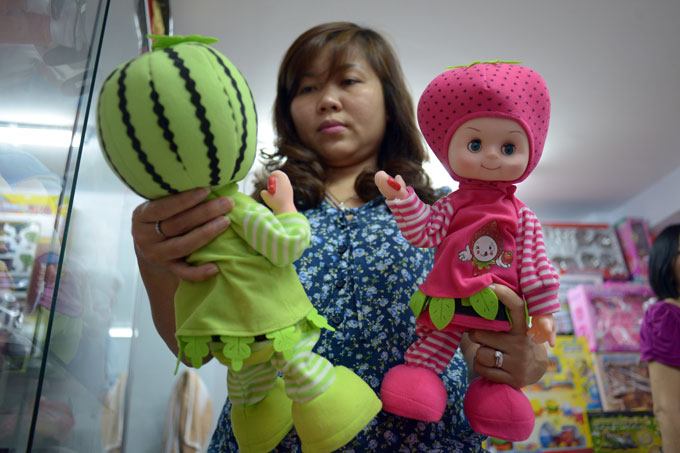 While European state agencies have seized batches of Chinese toxic dolls with "fruit" heads for destroying as early as January this year, their Vietnamese counterparts remain calm, saying they must conduct proper procedures which often take months prior to a possible recall.

The ‘fruit-head’ dolls are widely known in Europe to contain phthalates, a chemical that can cause cancer and infertility for men.

Toxic in the west

BBC on December 15, once again, reported that the dolls containing chemicals that may cause cancer and deformities in unborn babies have been seized from a market stall in Medway, UK.

“The "fruit-head" dolls have strawberry, apple, tomato or blackcurrant-shaped heads, and contain phthalates, which can also cause infertility in men,” according to BBC.

“The brightly-colored toys have previously been banned across Europe.”

“Ian Gilmore, of Medway Council Trading Standards, said tests on four of the dolls were positive for the chemical,” said BBC.

On December 19, the French customs agency was reported to have destroyed 33,000 imported toys for Christmas season that contained phthalate which were 320 times higher than the European standards. According to AFP, the toys were imported from China via Belgium.

It was the latest moves of EU state agencies on the matter, but it is not new.

On January 15, another UK newspaper, the Telegraph, reported that the UK distributor of the products, Sandwell Trading Standards, “received six complaints about the dolls with one mother saying her child became ill after playing with one of them.”

“The ‘fruit-head’ dolls have a European-wide recall on them, along with other designs of the doll including crawling dolls with a polka dot dress and baby dolls with a picture of an animal’s head on the dress,” according to Telegraph.

“The dolls do not have a CE marking which appears on products which have met European safety regulations, meaning they cannot legally be sold in the UK.”

“Phthalates can be used to soften plastics and give them longevity but health concerns mean that the chemical is no longer used in products sold in Europe or the US.”

UK newspaper Daily Star, on January 27, reported that “batches of a cuddly toy doll have been seized from shops amid fears they could contain a toxic chemical.”

“Officials from other authorities, including Rochdale and Lancashire County Council as well as Sandwell, have also confiscated the soft toy from stores in recent weeks.”

“A health warning was sparked after a shipment of the toys was seized by customs officers in Spain in April, 2012”.

“The arms of the dolls were found to contain traces of the phthalate DEHP – a toxic chemical which causes cancer, deformities in unborn babies and even death,” Daily Star reported.

Tuoi Tre reporters on Saturday found that many toy shops in Binh Tan District, and in the markets of Binh Tay and Kim Bien, are selling the dolls.

Store employees told Tuoi Tre that said the products are popular given their colorful appearance and hilarious songs emitted when the toys are squeezed.

When Tuoi Tre reporters refer to the fact that the products have been widely reported in the west to contain toxic substances causing impact on a child's development process, store owners said they did not know and did not receive any warnings.

“Our store took about a dozen new products to try to sell for almost a week from the Kim Bien wholesale market. If we receive info that products contain hazardous substances, we will stop selling it and recall all the products sold," said a representative of a store.

Similarly, a number of shops specializing in wholesaling children's toys at Binh Tay market said they have not received any warnings, so they are still selling the toys as normal.

On the same day, according to a Tuoi Tre check on some streets specializing in toys for children in Hanoi, such as Luong Van Can, Hang Ma, Hang Can, the toxic products are still on sale.

When asked about the fruit-head dolls, Thinh, a shop owner on Luong Van Can Street, said the toys were a favorite choice for many children of around 3 years old. Despite slow sales volume compared to last year, the toys are still in the list of the most favorite products there.

Another shop owner, Huyen, said the products are not just retailed in Hanoi but also wholesaled to stores in other northern provinces, such as Vinh Phuc and Hung Yen.

A representative of the southern branch of commodities quality management department under Ministry of Science and Technology told Tuoi Tre late Saturday afternoon that the unit has yet to receive any information that this type of toy contains phthalate.

"At the moment, we are busy with summarizing annual reports for submitting by the year-end, so have yet to update the information about that.”

“But we will organize inspections of the imported units, conduct necessary tests and will recall them if the information that they contain hazardous substances is correct," he said.

On the same day, Ngo Quy Viet, General Directorate of Standardization, Metrology and Quality Department under the ministry, said he has just received information about toxic chemicals in the doll from the local and foreign press, and is having some dolls tested.

Answering the question why Vietnam does not recall such products like the move taken by authorities in the UK, Germany, and France, he said as the department has not received any official information from those foreign state agencies, but only information from the press.

“Based solely on this information, it is not enough to carry out an official recall here in Vietnam.”