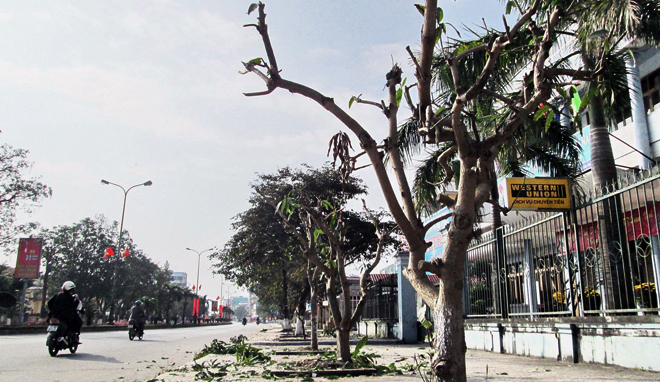 Soon after celebrating the Lunar New Year’s Eve on Jan 31, dozens of locals “besieged” three mango trees in front of a bank in northern Quang Binh province and plucked them of all their leaves in the traditional belief that the act would bring them good luck and blessings in the new year.

“Hai loc” (plucking leaves and buds from trees at pagodas in hopes that they will bring blessings) is one of the Vietnamese people’s Tet long-standing customs. However, in recent years the practice has become quite controversial as many tend to overdo it, believing that the more buds and leaves they pick, the more blessings they will have in the new year, which does serious damage to  trees in public places.

In this case, the mango trees, grown on the Quang Trung sidewalk in front of the province’s Social Policy Bank in Dong Hoi City, are believed to bring even greater luck as the leaves picked from near a financial institution are expected to bring more wealth in the Lunar New Year.

After surviving the super typhoon in late 2013, these poor trees again suffer from locals’ vandalism. It’s expected that it would take several years before the trees can give lush foliage and shades again.