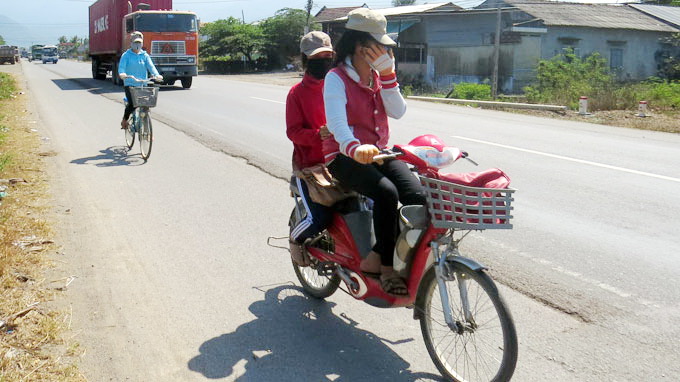 Police in south-central Khanh Hoa Province are investigating cases in which young men have slashed schoolgirls and women in the buttocks with sharp objects, causing injuries to the victims. This is an evil phenomenon that happened elsewhere in previous years.

Colonel Dang Duc Luan, chief police of the province’s Ninh Hoa Town, said that such cases, despite not causing serious injuries, have caused fear and worry among local schoolgirls and women. One case occurred on March 4, causing panic to three schoolgirls and injury to one of them, Luan said.

At 7:00 pm that day, P.T., a schoolgirl, was riding her bicycle with two friends on a road in Ninh Loc Commune, when a young man, about 20, deliberately traveled close to them. After a while, the man got close enough to the schoolgirls to use a pointed object to slash T. on the left side of her bottom and sped away. T. was taken to hospital later, and received stitches on the wound. Another such incident occurred at 6:00 am on February 25 when a 17-year-old schoolgirl at Ton Duc Thang High School, who was traveling on a bicycle, was slashed with a sharp object by a strange man on a road in the same commune. The attack produced a 5 cm long wound on the left part of the girl’s backside. Only five minutes later, a similar incident occurred to another schoolgirl at Tran Cao Van High School, leaving a 9 cm long wound on the victim’s buttocks. The first slashing was discovered on February 23 and since then, there have been at least seven occurrences reported in the town, police said. The parents of these victims are very worried about the safety of their children. The father of T. said, “T. will have to stay at home for a while if we cannot arrange a time to take her to and pick her up from school.”    Police have launched investigations and mobilized forces to hunt for the culprits, Colonel Luan said.

Incidents elsewhere This evil phenomenon also occurred in Ho Chi Minh City and neighboring Tay Ninh Province last year. In April 2013, HCMC police arrested a man for cutting local young women, mostly students, on their thighs using a razor blade. The culprit was Huynh Quang Nhu, 27, a resident of District 12, who nicked five women from March 29 to April 3, 2013. After being arrested, Nhu told police that he had fallen into a depression after his parents got divorced and he had committed such acts as a way to “take revenge on life.”

Other slashing cases happened in late 2011 in Tay Ninh where four attackers were captured and later charged with assaulting and humiliating others. According to the indictment, Nguyen Thanh Tai, 28, Pham Thanh Duy, also 28, Vo Le Hoang Ngu, 29, and Phan Ca Li, 17, were charged with 17 slashing incidents in the southern province.

At a trial in October 2012, the provincial People’s Court sentenced Tai, the mastermind behind these assaults, to ten years in prison, while Duy received six years, Ngu got four and a half years, and Li was handed a 15-month jail term.