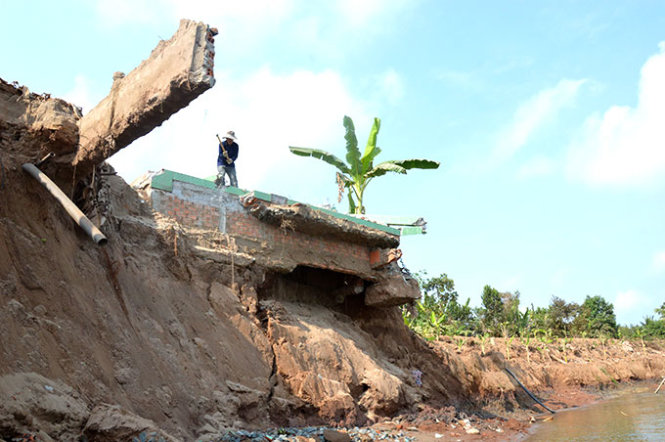 Illegal sand mining has wreaked havoc on many provinces in the Mekong Delta and has partly triggered the land subsidence which shattered many local homes.

The trail of destruction left behind by land sinking along the Tien River, a tributary of the Mekong River in southern Vietnam, is alarmingly evident.

Land subsidence has left many local houses built along the river seriously ravaged, with some giving way entirely. One of the reasons for such irreversible devastation is rampant sand theft, Associate Professor Le Anh Tuan, deputy head of Can Tho University’s Climate Change Research Institute, told Tuoi Tre (Youth) newspaper on Friday.

In many areas across the country, barges and boats are often seen night and day, as their operators suck huge amounts of sand from river beds.

The sand is in good demand as construction materials.

The trail of destruction left behind by an instance of land subsidence on March 10, 2015 which ate away a 75-meter strip of land in Chau Thanh District, located in Dong Thap Province. Photo: Tuoi Tre

“Statistics have revealed that the total area of the houses built with sand extracted from river beds is almost equivalent to the area near the river which has collapsed or sunk,” Tuan pointed out.

“Local residents are the ones who suffer the most from this rife sand theft,” he stressed.

Thirty-one square kilometers of land in total in 40 communes in nine districts, towns, and cities across the province has seen worrying sinkage and damage.

Another resident in Hong Ngu District, located in the Mekong Delta province of Dong Thap, expresses her frustration at what is left of the house her family saved for years to build. Photo: Tuoi Tre

A house in Hong Ngu District is split into two separate parts by land subsidence, with the void in between being turned into a path. Photo: Tuoi Tre

A resident in Chau Thanh District is plunged into immense difficulty after her house was hit by land subsidence on March 10, 2015. Photo: Tuoi Tre

The construction site of a dyke system in Sa Dec City, located in Dong Thap Province, which is meant to provide cemented protection against flooding and land sinking. Photo: Tuoi Tre

One of the reasons for land subsidence and irreversible damage to residents’ homes is rampant sand theft. A crane is pictured illegally scooping up huge amounts of sand from the river bed and dumping them onto boats. Photo: Tuoi Tre