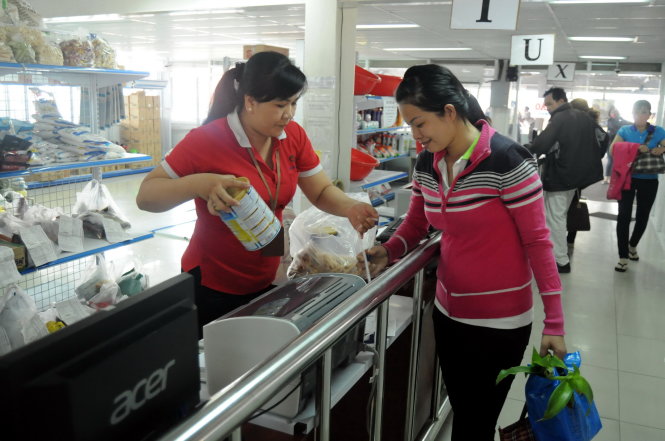 Two Korean-owned companies in Vietnam are running their own supermarkets which offer goods at low prices to their workers in a bid to improve their living conditions.

Chang Shin Vietnam Co., based in Vinh Cuu District in Dong Nai Province, which borders Ho Chi Minh City, and Tae Kwang Vina Co., located in the Bien Hoa Industrial Park 2 in the same province’s Bien Hoa City, built their own supermarkets on their premises in 2010 and 2012, respectively.

Both the companies are Korean-owned producers of sneakers.

Their supermarkets are open exclusively to their workers, who have within their reach a wide array of consumer goods at prices equivalent to or less expensive than those at major supermarkets or conventional markets.

Their opening hours – before and after workers begin and finish their shifts – also save them the time and trouble of going to makeshift sidewalk markets.

Nguyen Xuan Phuoc, a worker at Chang Shin Vietnam Co., told Tuoi Tre (Youth) newspaper that it is harder to buy fresh vegetables and meat at sidewalk or conventional markets after his late shifts.

Dao Tien Minh, another worker, finds it considerably more comfortable and quicker to pick up items at his company’s supermarket than grocery stores.

Similarly, Nguyen Thi Thang, 52, another worker at Chang Shin, said she is assured of the origins and quality of her purchases at the supermarket.

“Our company has also earmarked money to make sure its workers benefit from quality, affordable buys,” he added.

According to a Tae Kwang Vina Co. supermarket staffer, the supermarket purchases goods worth a total of VND700 million ($32,622) each month, including over 150 different items, to cater to their workers’ diverse demands.

The supermarket also allows workers to mark their desired items on provided lists of articles and prices before giving them to supermarket attendants or dropping them into containers placed around the company.

As the supermarket staffers pick the chosen items beforehand, it takes customers only around five minutes to pick up their purchases after leaving work.

The service has proved particularly helpful to workers, especially after their overtime sessions, when they are too tired to shop.