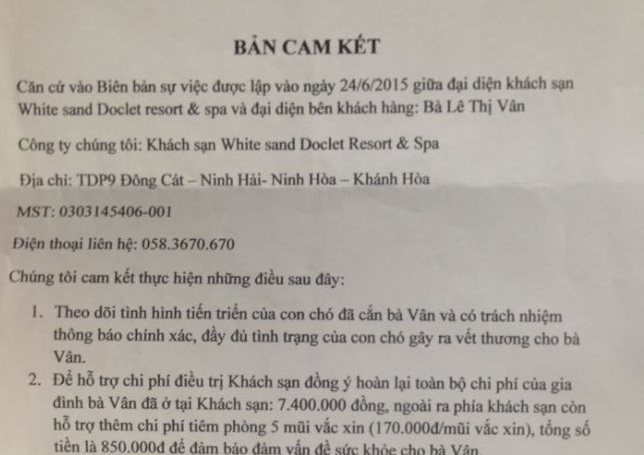 A woman who was bitten by a dog at a resort in the south-central Vietnamese province of Khanh Hoa has complained that the resort’s management board has not fulfilled its commitment on the incident.   Le Thi Van, the dog-bitten tourist, said that the White Sand Doc Let Resort & Spa, located in Ninh Hoa Town, had compensated her for the bite, but it has not kept her informed of the health of the dog or given any regards to her after the incident on June 24. At 9:00 pm that day, Van was strolling inside the 4-star resort when she was bitten by a dog on her left calf, leaving a bloody, deep wound. Some staffers of the resort took her to a local hospital for treatment.

A report about the incident was made later between a representative of the resort and Van, reading, “The resort undertakes to be fully responsible for Van’s injury and damage caused by the incident.”

One day later, a letter of commitment was prepared and signed between Chau Thi Thanh Truc, director of the White Sand Investment Development Joint Stock Company, which owns the resort, and Van about the incident. The letter reads, “In order to support Van, the resort refunds the entire amount of VND7.4 million [$339] paid by the woman for her family’s stay. In addition, the resort also pays Van VND850,000 for the expenses of five vaccine shots.” The document also states that the resort must follow up on the health status of the dog that bit Van and notify her, but the resort has not fulfilled this commitment, Van said. The resort’s management has not given any regards on her health since the incident, either, the woman added. The victim also complained that when the biting happened, the staffers initially said the animal did not belong to the resort. It was not until Van and her relatives responded strongly to their denial that they admitted the dog is owned by an employee of the resort, Van said.