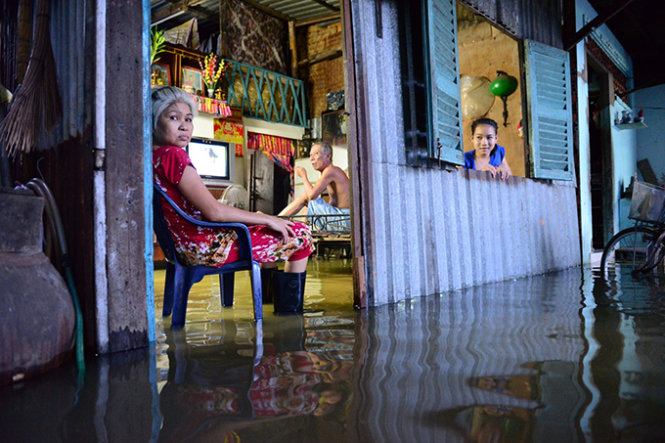 High tide on Saigon River to peak at 1.61 meters Thursday

Many areas in Ho Chi Minh City will continue to be submerged on Thursday, as the rising tide of the Saigon River is expected to peak at 1.61 meters on Thursday, the Southern Hydro-meteorological Station reported.

The flood tide, which occurred on Tuesday, has inundated various locations, particularly low-lying areas of the city under up to 40cm of water, affecting residents, slowing down traffic and causing numerous vehicles to fail.

A man pushes his bike through a seriously flooded area due to high tide on October 28, 2015. Photo: Tuoi Tre

Nguyen Van Ut, a resident in an area near the Thanh Da embankment in Binh Thanh District, told Tuoi Tre (Youth) newspaper on Wednesday that he has had to move all of his electrical appliances to higher places during every high tide to avoid electrocution.

Today the tide is forecast to reach its highest point of 1.61 meters, continuing the flooding in these areas before beginning to recede on Friday, the station said.

In order to ensure safety for people during the flood tide, the municipal Department of Transport has coordinated with the local Anti-flooding Program Operation Center to erect warning boards and assign staff to guide people in traffic and avoid dangerously submerged sites.

The rising tide is a result of the impacts of the trough and southwest monsoon in the southern region, the station said.