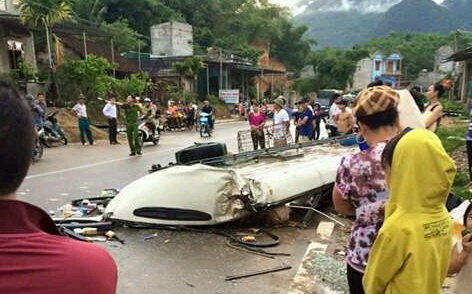 The roof of a passenger bus in the north-central province of Thanh Hoa came off as a truck hit head-on, leaving seven hospitalized.

Seven passengers aboard a bus on National Highway No. 217 were heavily injured after a truck en route from Quan Hoa to Lang Chanh Districts crashed head-on into the vehicle, tearing off its roof, on Tuesday.

The incident occurred at 2:20 pm when truck driver Bui Cong Hoa, 32, drove his vehicle into a passenger bus driven by Tran Van Hanh, 41, traveling in the opposite direction, forcing off the top of the bus and leaving seven passengers with severe injuries.

The injured were admitted to a general hospital for medical treatment.

According to doctors, although the injuries amongst the passengers were severe, none were life-threatening.

Nguyen The Anh, a local official, confirmed the accident and told Tuoi Tre (Youth) newspaper reporters that the two vehicles had been suspended by local police for investigation.

Local authorities visited the victims on Tuesday evening to offer VND5 million (US$224) each to support medical treatment.