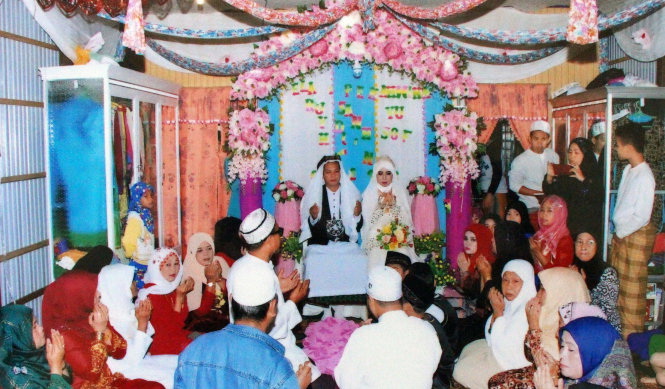 Residents of La Ma Hamlet in Vinh Truong Commune believe that their village would set up a world record of throwing the most wedding parties this Tet, or the Lunar New Year.

Over 40 La Ma households have notified officials in An Phu District that administers the hamlet of their wedding receptions from January 28 to February 2, which coincide with the first six days of the Year of the Rooster.

Forty is still not a record in this village as La Ma people organized 50 weddings en masse in 2015, Abubaco, a dignitary at the Anromah mosque, said.

The young couples work at factories in industrial parks in the provinces east of Ho Chi Minh City all year round so they are trying to take their Tet days off to get married, local authorities explained.

La Ma, located in the Mekong Delta province of An Giang, has 536 households with 1,696 people, according to the latest statistics. Most of them are members of the Cham minority and follow Islam.

The weddings have simple meals, including biscuits, fruits, and soft drinks, with some featuring beef curry. No alcoholic beverages are served at the weddings.

The Muslims here ban alcohol use so no drunkard-related scuffles have ever happened in the wake of their wedding receptions, an An Phu policeman said.

One integral part of the weddings in La Ma is music and singing. Music bands here are so important that couples are willing to delay their weddings if the bands are too busy to play at their receptions.

After their wedding, the groom often stays at the bride’s family home for a while before they leave their village to return to work.