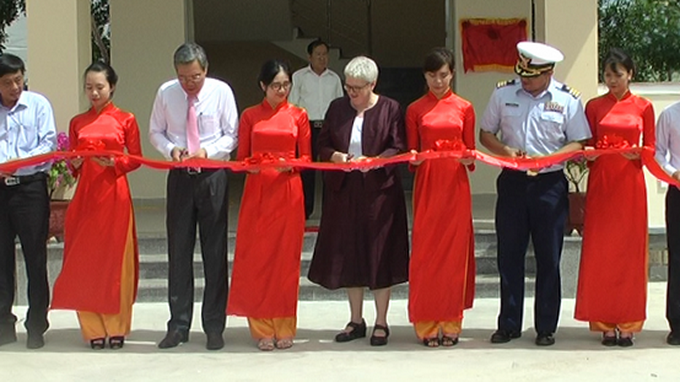 A U.S.-funded center for the mitigation and prevention of natural disasters was inaugurated on Wednesday in Vietnam.

The Ninh Thuan Natural Disaster Management Coordination Center will serve as a safe haven for the south-central province of Ninh Thuan’s Search and Rescue Management Authority during hazardous weather and a storage center for emergency supplies and communication systems for utilization during natural disasters, according to Susan Sutton, deputy chief of mission of the U.S. Embassy in Vietnam.

The first phase of the project, the opening of a VND10 billion (US$446,500) component built on a 1,000 square meter zone in Phan Rang-Thap Cham City, was inaugurated in a ceremony jointly held by the provincial administration, the U.S. Embassy, and the U.S. Pacific Command.

Wednesday’s ceremony also launched the beginning of the project’s second phase, the planned installment of a disaster warning system worth VND6 billion ($267,800) which will allow the center to give a timely forecast of natural disasters and take necessary actions to mitigate their effects on the local area.

The combined costs of constructing the entire center, totaling VND16 billion ($714,300), are covered by the U.S. government.