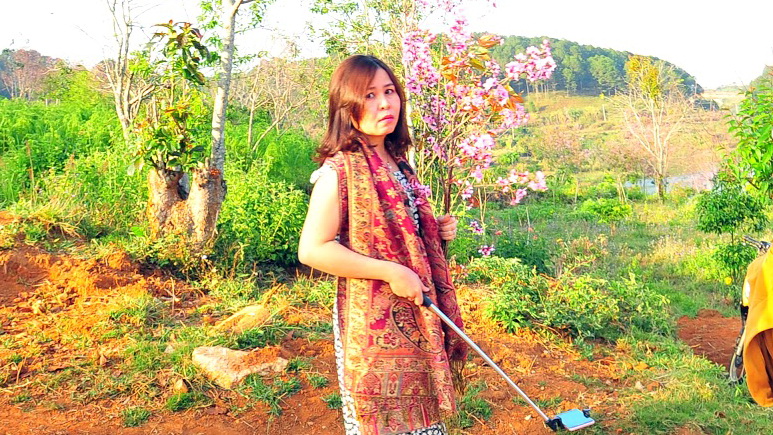 A woman identified as the deputy director of the justice department of a south-central Vietnamese province has attracted a storm of online criticism, following Facebook photos showing her holding a freshly-plucked branch of cherry blossoms in Da Lat.

The story went viral on Facebook on Sunday after it was posted by Da Lat resident Ngo Anh Tuan, with the justice department of Binh Thuan Province later confirming that one of its deputy directors was involved in the incident.

According to Tuan’s account, Pham Thi Minh Hieu defied the protests of others when she insisted on picking a branch of a cherry blossom tree near Tuyen Lam Lake, one of the most popular attractions in Da Lat.

When Tuan told Hieu not to destroy the flowers, the woman bit back and asked if Tuan had the authority to tell her so.

The two then got involved in a quarrel, with the woman and others in her party eventually leaving, according to the Facebook post.

Tuan managed to capture some photos of the flower-picker. One photo shows the woman with a branch full of blooming cherry flowers in one hand, and a ‘selfie stick’ in the other.

The story was shortly shared on Facebook, with some quick to identify the woman as Hieu, who is also a member of the Binh Thuan People’s Council.

Tuan later confirmed to Tuoi Tre (Youth) newspaper that he only reported what really happened.

On Sunday morning, an official from the Binh Thuan administration confirmed to Tuoi Tre that the woman in the viral photos was Hieu.

Hieu met with a Tuoi Tre correspondent later the same day, confirming that she and some colleagues had visited Tuyen Lam Lake after a business trip in Da Lat on March 2.

The deputy department director added that her driver saw a cherry tree branch that was “almost broken” so he decided to pick it for her.

“I am besotted with flowers and my house is also full of flowers,” Hieu told Tuoi Tre.

“The driver was giving the flowers to me so I accepted his offer, not thinking that this was an action worth making a fuss about.”

Hieu also confirmed that she and a group of people had quarreled over the flower picking.

“I should have let the cherry branch be the way it was.

“I truly apologize for the inconvenience.”