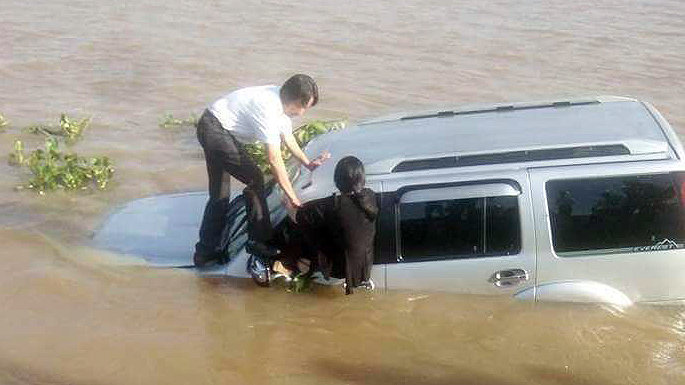 A car fatally struck a ferry terminal attendant in the southern Vietnamese province of An Giang before plunging into the river.

The accident happened at around 7:30 am on Thursday at the Thuan Giang Ferry Terminal in Kien An Commune, Cho Moi District.

Immediately after Tran Minh Phuong, 32, an attendant at the facility, opened a gate to let vehicles board the ferry, a seven-seat car driven by Chau Hong An, 56, suddenly sped up and hit him.

The vehicle then plowed into another man before plunging into the Hau River.

An and his wife were able to escape the vehicle before it sunk into the river and onlookers threw lifebuoys to help rescue the couple.

Phuong was immediately transported to the hospital for emergency treatment but later succumbed to his wounds.

The ferry terminal’s management team has visited and offered Phuong’s family VND20 million (US$880) in support.

Senior Lieutenant Colonel Nguyen Van Bang, deputy chief of the police station in Cho Moi District, affirmed on Thursday afternoon that they were working with the driver to determine the cause of the accident.

The car has yet to be salvaged from the river bottom due to strong currents, he added.