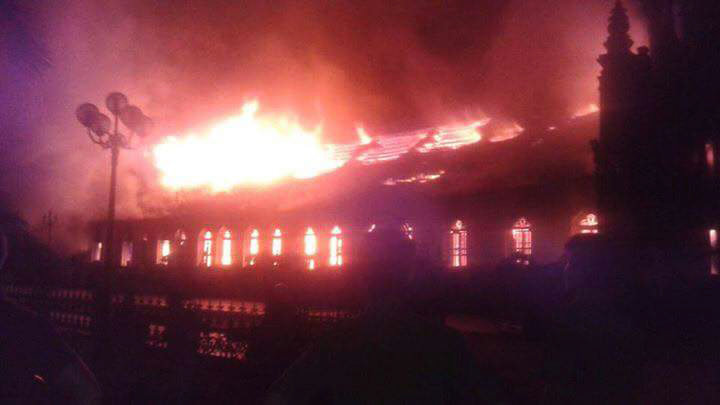 A fire gutted a cathedral dating back to the 19th century in northern Vietnam late Saturday night, destroying its interior, with no casualties reported.

According to local police, the fire broke out around 30 minutes to midnight at Trung Lao Cathedral in Truc Ninh District, Nam Dinh Province.

Hundreds of firefighters, police officers and local residents attempted to control the raging fire as it devoured the 129-year-old building.

The fire was not put out until two hours later, after having burnt down almost the entire interior of the catholic cathedral.

Truc Ninh police officers suspect a short circuit to have caused the midnight fire, though further investigation is underway to definitely conclude the cause.

No casualties have been reported as the cathedral was empty at the time of the fire.

According to locals, Trung Lao Cathedral was constructed between 1888 and 1898, and is a place of worship for thousands of Catholics in Truc Ninh District.

The building was a fusion between Gothic and traditional Vietnamese styles of architecture, measuring 50 meters long and 16 meters wide, divided into 11 chambers.

The cathedral’s exterior featured brick walls and tile roofing, while the interior was furnished entirely with wooden columns and beams measuring up to 80 centimeters in diameter.