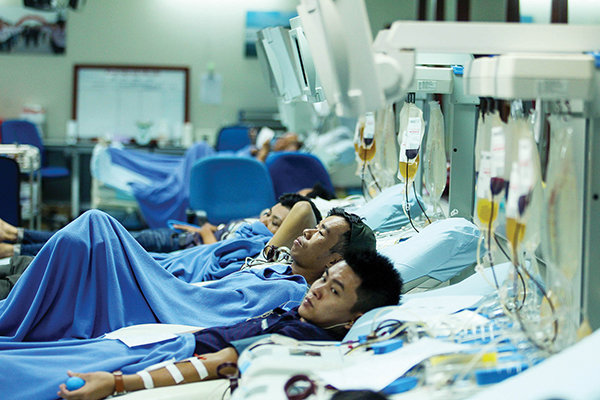 Many Vietnamese undergraduates who are short on money have resorted to regularly donating their platelets for a few extra pennies to put them through college.

Some of them even ignore doctor’s recommendation and go for platelet donations as often as three times a month, risking adverse health problems.

Platelets, also called thrombocytes, are a component of blood whose function is to stop bleeding by clumping and clotting blood vessel injuries, according to Phu Chi Dung, director of Ho Chi Minh City Blood Transfusion and Hematology.

A donor can lose up to 20 percent of their platelet counts after each donation, Dung said.

Donated platelets are used in transfusions for cancer patients who suffer from low platelet count as a side effect of their treatment, and to help patients survive major surgeries or serious injuries by replacing those lost during bleeding, according to the American Red Cross.

It was 8:00 am at the six-story blood transfusion center of Cho Ray Hospital in Ho Chi Minh City, and 25 people, most of whom still in their 20s, were already lining up outside the platelet donation room.

Another group of 15 people could be seen inside the room, with cords running from their arms to centrifuge machines that separate platelets from their blood.

Cho Ray Hospital is among only three medical institutions in Ho Chi Minh City where platelet donations can be done, with the other two being the Blood Transfusion and Hematology Hospital and Military Hospital 175.

According to experienced donors, platelets are favored over whole blood when it comes to making money off the donation, as they are collected by hospitals at a higher price and can be donated more regularly.

V.H.H., an undergraduate at a university based in Ho Chi Minh City’s District 1 who was waiting for his turn to donate, told a Tuoi Tre (Youth) newspaper correspondent he could not recount how many times he had undergone the procedure, which had become his savior every time he runs out of money.

“They will run your blood through a centrifuge machine to separate platelets and some plasma before returning the blood to your body, so you won’t feel as dizzy as during a blood donation,” H. advised the ‘newcomer’.

Whether one is allowed to make single-unit or double-unit donations entirely depends on their physical fitness and doctor’s prescription, H. said.

“A lot of undergraduates come here regularly to sell platelets,” a nurse at Cho Ray Hospital revealed. “I’ve even memorized some of the frequent faces.”

After waiting outside for about two hours, H. and the Tuoi Tre correspondent were both called inside the air-conditioned room furnished with 15 beds and 15 centrifuge machines.

Around 300ml of blood is pulled from the donor’s veins at a time into the machine, where it is spun around to separate platelets and blood plasma before being returned to the donor.

Each separation cycle takes 10-20 minutes to complete, which each donor undergoing between six and 20 repeated cycles of draw and return depending on the amount of platelets they are up for donation.

After finishing the donation, each donor goes home with their allowance and a takeaway meal consisting of a banh mi, three cartons of milk and some iron supplements.

“I had to think of other things to distract myself from the thought of having a needle inserted into my vein,” said Minh, an undergraduate from the Central Highland province of Gia Lai, after leaving the donation room.

Having donated platelets multiple times, Minh said he had never got over the nervousness of seeing blooding flowing out of his body, though he had no other options to earn quick money to cover the expenses of living in the city.

“My parents back in our hometown can only afford to pay for a part for my tuition fees, so I have to find my own ways to get by,” Minh said.

P.T.T.H., a female undergraduate from a university in Ho Chi Minh City’s Thu Duc District, boasted about her ‘achievement’ of undergoing no less than 20 platelet donations since starting college.

Having learnt of the ‘service’ while being a member of a volunteering club at her university, H. said she had since taken up platelet donating as a ‘part-time job’.

There were months when she would pay visits to hospitals for up to three times just to sell platelets.

“I only take about two weeks for recovery after each donation before returning for another,” H. said.

“It’s okay as long as I can hide the needle scars on my arms,” H. said.