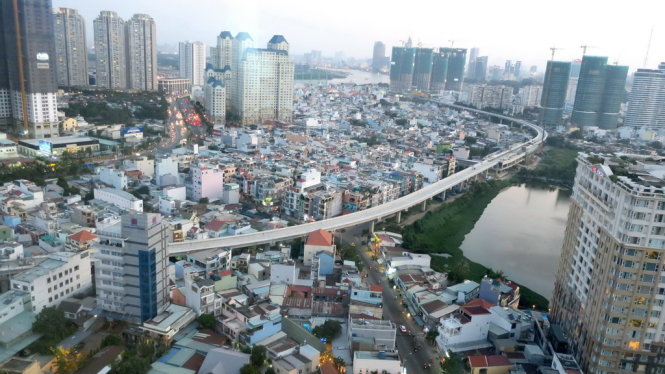 In a break from the city’s previous position that slow capital disbursement is to blame for the snail-paced construction of Saigon’s first metro line, Vietnam’s investment minister revealed Thursday that enormous cost overruns are the real culprit.

Now, the goal of opening the metro line by 2020 seems in jeopardy as some contractors suspend their work and others consider terminating their contracts, all due to insufficient investment from the project’s developers.

On Thursday, Minister of Planning and Investment Nguyen Chi Dung said the setback is primarily due to the developer’s proposed increases to the project’s total investment by an amount so enormous that only the National Assembly is authorized to give approval.

The project was initially approved at an estimated investment value of VND17 trillion (US$748.9 million), while Ho Chi Minh City authorities have proposed adding an additional VND30 trillion ($1.32 billion) to the budget, Dung said at a meeting of the lawmaking National Assembly Standing Committee in Hanoi.

“However, due to its large scale, the metro line has been classified as a key national project and any adjustments should be reported to the legislature for approval,” the minister underlined.

To date, additions to the investment in the Ho Chi Minh City metro have yet to be approved due to disagreements between the finance ministry, transport ministry, and the municipal administration on what percentage will be funded by the state budget.

In the meantime, the initially approved capital of VND17 trillion has been depleted and the project is at-risk of being put on-hold.

Postponed construction of the Japanese-developed project will result in negative consequences for the country’s eco-social development and Vietnam’s foreign relations, the investment minister warned.

He therefore called on the National Assembly to urgently approve the proposed capital increase so that the project can continue.

National Assembly chairwoman Nguyen Thi Kim Ngan and her deputy Phung Quoc Hien, however, have asserted that no official report regarding the capital increase has been submitted for their consideration.