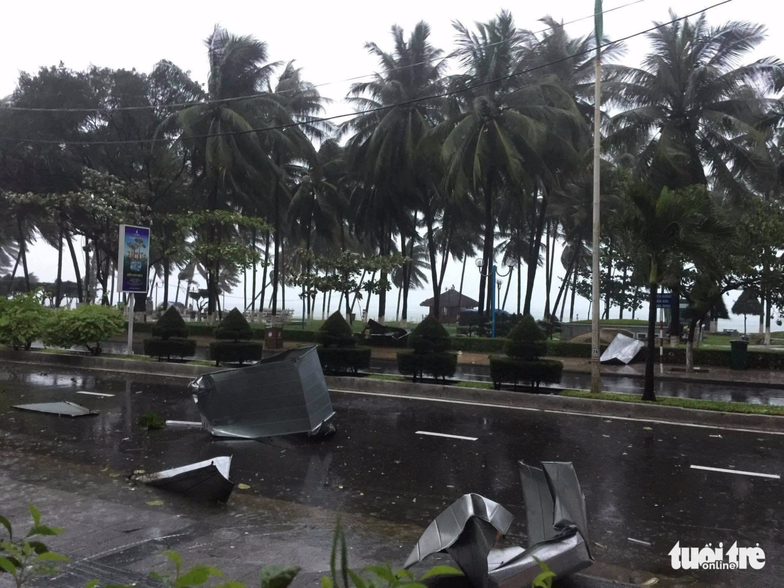 As of 7:00 am, the storm was wreaking havoc on the coastlines in Khanh Hoa and Phu Yen provinces, packing winds at up to 135 kilometers per hour.

In Phu Yen, the storm has unroofed a number of houses and uprooted numerous trees. As of 9:00 am on Saturday, there were no immediate report of casualties during the storm, according to the province’s deputy chairman Tran Huu The.

Traffic was disrupted and power went out in the entire Ninh Hoa town in Khanh Hoa due to the storm. In Nha Trang, the beach city of Khanh Hoa, winds continued to strengthen from the time the typhoon entered the mainland.

Extremely heavy rains are forecast for provinces from Quang Tri to Binh Thuan, whereas locations in the north-central, Central Highlands and southern regions are also expected to suffer from downpours, the National Center for Hydro-Meteorological Forecasting said in its 9:00 am storm announcement on Saturday.

From November 4 to 8, rivers from Ha Tinh to Binh Thuan provinces and the Central Highlands are expected to suffer from flash floods and landslides, according to the center.

Storm Damrey, the 12th typhoon to hit Vietnam this year, is forecast to continue moving deeper into the mainland before weakening into a tropical depression later today.

As of 7:00 pm, the tropical depression will reach the mainland of Cambodia, with winds losing strength to only 40-60 kilometers per hour. On Friday, authorities in Binh Dinh, Phu Yen, Khanh Hoa, Ninh Thuan and Binh Thuan, provinces expected to be affected by the typhoon, have developed plans to evacuate a total of 389,143 people.

More than 3,000 locals on the island district of Can Gio in Ho Chi Minh City were also evacuated to safe places late Friday.

As of Friday evening, Vietnam Airlines and Vietjet said they will collectively cancel 32 flights on Saturday.