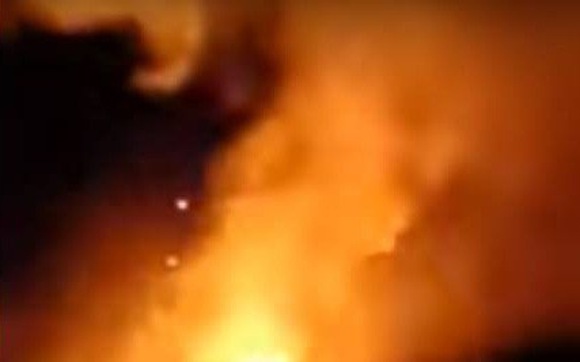 The explosions started around 10:00 pm at an ammunition warehouse belonging of Armored Tank Brigade 273, stationed in Kdang Commune, Dak Doa District in the Central Highlands province of Gia Lai.

Nguyen Thi Thanh Nga, a local resident living more than two kilometers from the explosions, said she was preparing for bed when a series of violent bangs shook her house like an earthquake.

“When I got outside, I saw a large column of black and red smoke rising from the military base,” Nga recalled.

“I grabbed what I could, put my kid on the motorbike, and drove as far as possible to escape the explosions. They lasted for at least 40 minutes. I felt as if the glass inside my house would shatter,” she said.

Three fire trucks were deployed to the incident but were unable to move within a kilometer of the facility due to safety reasons.

By 1:00 am on Thursday, a perimeter had been set around the warehouse to prevent onlookers from getting too close to the danger zone, according to Colonel Le Xuan Hoa, commander of Gia Lai Province’s Military Command.

“Authorities have evacuated local residents and soldiers stationed at nearby bases,” Hoa said.

Le Viet Tham, chairman of Dak Doa District, said at 12:30 am on Thursday that a report of the damage will not be made available until all evacuation and firefighting efforts have been completed.

No casualties had been reported by 3:40 am the same day.

Ama Rinh, a local living approximately five kilometers from the explosions, said local villagers ran for their lives upon hearing the blasts and waited nearly an hour after the commotion died down before returning home.

“It was a frightening experience, but everyone I know is unharmed,” Rinh said.