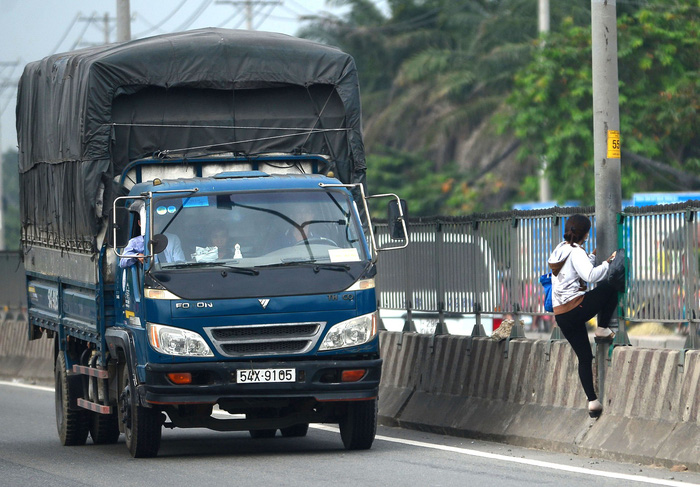 Jaywalking has remained an unsolved problem in Vietnam despite heavier penalties stipulated in a new regulation that took effect at the beginning of this year.

The amendments to the Penal Code, which came into force from January 1, 2018, included stricter punishments upon pedestrians who violate traffic laws.

Jaywalkers will be jailed if their offense either results in at least three deaths; harm to at least three people with the total bodily damage ratio of 201 percent; or property damage worth at least VND1.5 billion (US$66,150).

The jail terms for the offenders range from seven to 15 years.

However, many pedestrians are still breaking traffic regulations on a daily basis, risking their own lives and the safety of others.

According to the observation of Tuoi Tre (Youth) newspaper reporters on Saturday, residents were defying dangers as they crossed the streets and even climbed over the median strips along National Highway 1 and Hanoi Highway in Ho Chi Minh City.

At the section of No Trang Long Street in front of the Oncology Hospital in Binh Thanh District, hundreds of patients, family members, and doctors were crossing the busy road despite the presence of a pedestrian bridge.

It is difficult for drivers to avoid these jaywalkers, Truong Thi Nhan, a drink vendor near the Suoi Tien footbridge, said, adding that accidents are quite common.

Le Minh Tan, a resident in District 8, stated he often shies away from traveling across the Tu Du Hospital due to jaywalkers.

Many cross the road as if they were taking a stroll along a pedestrian street, Tan complained.

Meanwhile, amidst the bustling Lang Ha Street in Hanoi, a man was seen jaywalking without hesitation, catching many drivers off their guard.

A clean and convenient pedestrian bridge is located just about 10 meters away from where he crossed the street.

At the section of Nguyen Xien Street near the Thang Long University, 10 groups of students, workers, and elderly people jaywalked within only 30 minutes, in spite of multiple ways for pedestrians.

Many pedestrians admitted their wrongful behaviors, stating that crossing the street in such a way is more convenient and has become their habit.

Statistics in 2017 showed that a total of 495 jaywalkers were handled by traffic officers in Ho Chi Minh City.

Only seven percent of the offenders were fined while the others received a warning.

Meanwhile, traffic cops in Hanoi imposed fines upon about 100 jaywalkers in 2017.

The situation cannot be changed if no strict penalties are imposed, Tuong said.

Alongside the new regulations, officers must exert more efforts to enforce the law and change the habit, he added.

Nguyen Le Ninh, a member of the city’s Fatherland Front, believed that pedestrians are forced to walk on roadways as many sidewalks are occupied.

The locations of pedestrian crossings are not suitable on many streets, while other routes lack footbridges, which are some causes of the problem, Ninh added.

Jaywalking occurs so frequently that it is difficult for traffic units to deal with all of the cases, the official elaborated.

Local residents complained that the steps of some footbridges are too high, making it hard for senior citizens and people with health problems to use them.

This issue is most evident at the pedestrian bridges in front of hospitals.

Experts said that escalators should be added to pedestrian bridges to resolve such a problem.

According to Nguyen Vinh Ninh, director of the Ho Chi Minh City Urban Traffic Management Zone No. 1, the construction of many footbridges has been facing challenges as they block citizens’ houses in the surroundings.

Vo Khanh Hung, deputy director of the southern city’s Department of Transport, stated that the building of pedestrian bridges has been supported by local authorities and residents.

Escalators will be added to help those unable to use the steps, Hung continued.