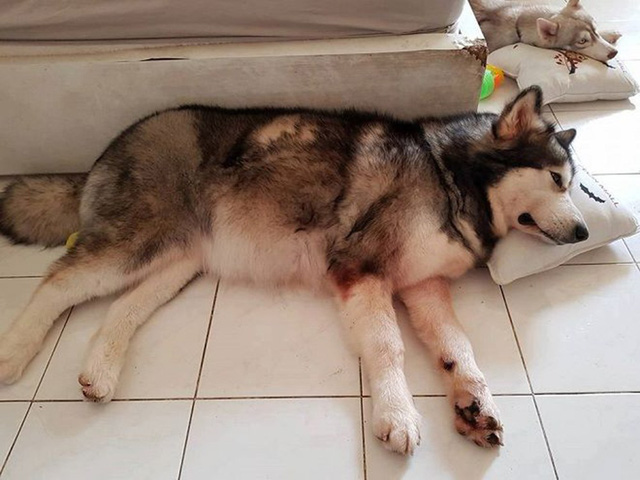 ‘Hero’ dogs save many in Saigon apartment fire that killed 13

Survivors of a deadly fire at an apartment building in Ho Chi Minh City that claimed 13 lives and injured nearly 100 others on Friday have recalled being miraculously saved by their pets.

The District 8-based Carina Plaza was engulfed by a blaze that broke out when most of its tenants were sleeping early on Friday.

Danny Nguyen, 29, and his wife, her fifth month of pregnancy, were waken up at around 2:00 am, when the fire was on for about 30 minutes, by their pets, a Husky and an Alaska dogs.

The hounds barked vigorously and continuously scratched the door of their apartment on the building’s first floor.

Upon opening the door, Danny saw a huge cloud of smoke outside and immediately rushed out of the apartment with his wife and the Husky, having no time to take the Alaska with him.

Danny decided to return to his flat to save the Alaska and her newborn puppy. However, as his house was filled with toxic smoke, the man was knocked unconscious on his way back to the apartment.

The man was later rushed to the hospital. He and his wife only suffered minor injuries and slight burns.

One of Danny’s friends managed to find and rescue the mother Alaska canine and its puppy.

The couple would have had no idea of the fire without the help of their pets, as it was confirmed that no fire alarm was sounded at the time of incident.

Le Huy Khoa, who leased the apartment to Danny for VND7 million (US$300) a month, decided to exempt the rental fee this month for his tenants after learning about tragic accident at Carina Plaza and the touching story of the dogs saving their owners.

Khoa said he hoped that his act could be replicated by owners of other apartments for rent in the Carina Plaza as a way to help the unfortunate victims of the catastrophic fire.

Another Carina Plaza resident, Nguyen Anh, also recounted how her Poodle dog saved her life in the tragedy.

“The dog barked continuously at around 1 am to signal us of the [upcoming] fire,” Anh told members of an online forum called “We love Poodle”.

She and her family were sleeping deeply at the time of the fire and there was no sound from fire alarm.

Her little dog even jumped on the bed, trying to wake her up, Anh recalled.

Anh and other family members quickly ran to the corridor with their four-legged friend, intending to get out of the building by the fire escape.

However, the dog then resisted coming with them and returned to the apartment.

Anh and other family members thought the Poodle was scared of the fire and decided to stay hidden in the house.

Only after other residents of the building ran up to her floor, saying that the lower floors were completely filled with smoke did Anh know that she should stay inside her flat, as her canine seemed to suggest.

“I and other family members used wet towels to cover all the gaps of the ventilation system,” Anh recalled.

The big fire early on the morning of Friday at Carina Plaza took away the lives of 13 residents and left 91 others injured.

Police are still investigating the cause of the accident.