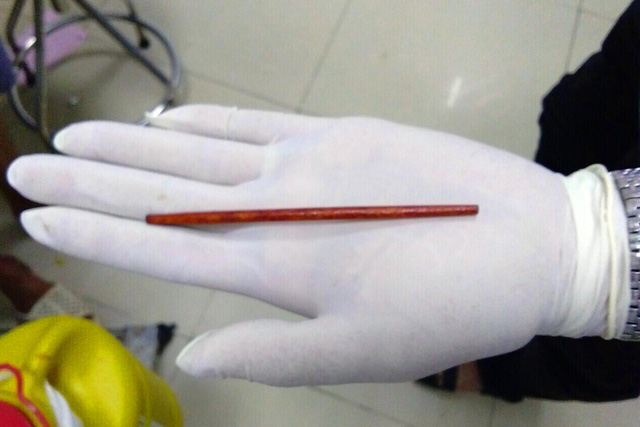 A small stick over ten centimeters long has been removed from a Vietnamese man’s penis after staying in it for a day, a doctor at an infirmary said on Tuesday.

N.V.D., residing in Dong Nai Province, was taken to the local Saigon-Dong Nai ITO Hospital having difficulty urinating and suffering pain in the sexual organ.

A doctor found inside the 42-year-old’s urethra – a tube carrying liquid waste out of the body – a foreign object lying about three centimeters from the urethra opening.

The object was not detected in X-ray scanning, prompting the professional to surmise it was not metal.

It peeked through the opening at a slight push of the doctor, who then took it out completely.

The object was a chopstick from six to seven millimeters in diameter, according to Tran Phuong, a doctor at the hospital.

The man’s urination returned to normal and he was discharged the same day.

According to Phuong, the patient said that one of the friends having a drink with him on April 16 had put the chopstick into his body for fun while he was blind drunk after the carouse.

One day later he visited the hospital for an examination after feeling problems in the penis.