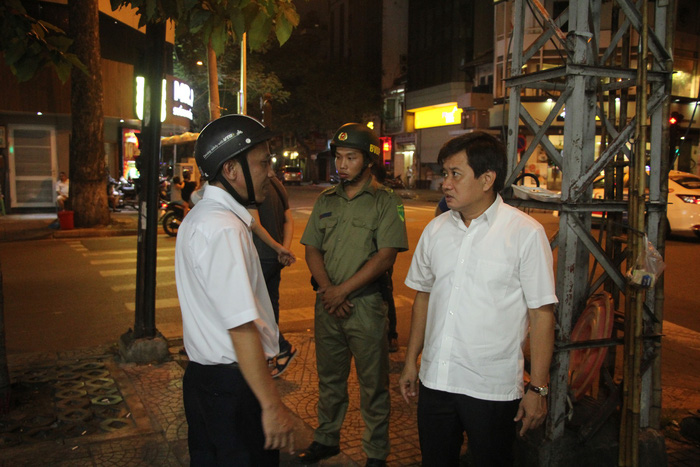 Doan Ngoc Hai, the man behind an ambitious campaign to clear streets and return the sidewalks to pedestrians in Ho Chi Minh City, has ‘taken to the streets’ again, leading a fresh crackdown after eight months of inactivity.

Hai, deputy chairman of the People’s Committee of District 1, instructed his men to sanction eateries that illegally occupied the sidewalks on several streets in Nguyen Thai Binh Ward on Monday night.

The crackdown marked the return of the ‘Captain Sidewalk,’ who asked to step down as deputy chairman of District 1 in January before making yet another request to take back that resignation in mid-May.

Neither the resignation letter nor the request to retract it was processed by higher authorities, meaning Hai remains in power as the deputy leader of District 1.

He demanded that Nguyen Thai Binh Ward leaders come to the scene and handle the case.

Many other restaurants occupying the sidewalks were also slapped with fines and had their chairs and tables confiscated.

Hai, 49, is dubbed ‘Captain Sidewalk’ for spearheading the drive to clear sidewalks of debris, illegal structures, and street vendors, so pedestrians can ‘win back’ what is meant for them.

The ‘sidewalk-clearing’ campaign began in early 2017 and continued well into October the same year, before coming to an unexpected end, followed by Hai’s decision to resign in January this year.

Upon taking the role, the ‘Captain Sidewalk’ said he would step down if his signature campaign failed, which he did as he thought he had been unable to clear the sidewalks.

In mid-May, Hai announced he would like to backpedal on his resignation, saying he still wanted to devote his efforts to the development of the city.

Hai then said he was willing to do any task assigned by his superiors and work in even the most dangerous and challenging places.

Why the campaign failed

Even though the campaign leader was largely supported by the community, who had longed to be able to walk leisurely on the sidewalks free of any occupants, Hai faced fierce objections from business owners and even death threats from vendors.

Hai submitted his letter to step down, saying he had “failed to deliver on [his] promise,” on January 8, when his ambitious project had been effectively abandoned.

The official said in the resignation letter that he had thought of finding a way to clean up the sidewalks across District 1 in March 2016, when he was tasked with overseeing the locale’s urban-related issues.