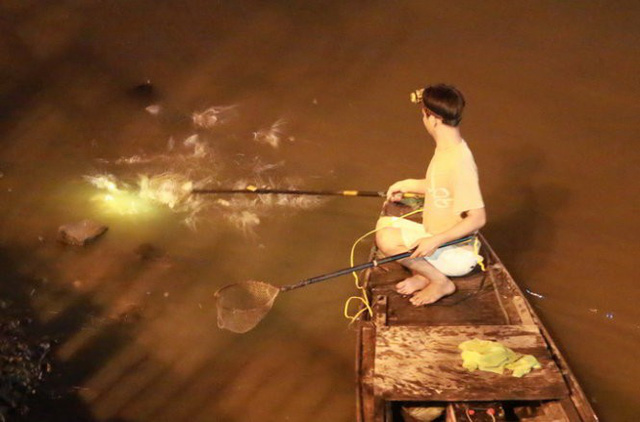 Doan Ngoc Hai, the famous Captain Sidewalk of Ho Chi Minh City, is now taking measures to prevent illegal fishing along the metropolis’ iconic canal, as such activity can have negative effects on water quality.

Hai, who is deputy chairman of the People’s Committee of District 1, has recently requested the city’s water police unit and the Department of Transport’s inspectorate to carry out regular patrols in order to deal with illicit fishing activities along the Nhieu Loc-Thi Nghe Canal.

Employees of the Urban Environment Company who are in charge of cleaning the canal were also asked with reminding local residents not to catch fish along the waterway.

Any violation should be reported to waterway police officers, Hai asserted.

The municipal administration has been adding various species of fish to the canal to improve water quality and the environment.

However, many citizens have been taking advantage of the situation to catch the aquatic animals against regulations, rendering the entire effort of local authorities meaningless.

Results of a recent inspection carried out by the District 1 administration showed that the illegal fishing often happens from 2:00 am to 5:00 am.

Illicit fishers travel along the waterway on their rafts and catch the fish with their nets or by electrocution.

It is also a common scene of people catching with their fishing rods along the banks of the canal, despite the presence of many signs stressing that the activities are prohibited.

It is estimated that the canal loses 50 metric tons of fish every year due to both pollution and overfishing.

It used to be a dead, heavily polluted canal and was given a facelift in 2012.