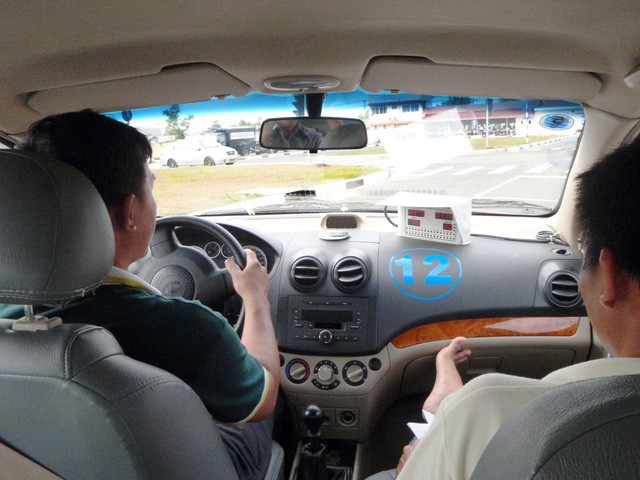 A driving instructor of a vocational center in Ho Chi Minh City has been discovered using bogus driving license, as part of a large-scale inspection by transport authorities that also unearthed numerous violations at other training facilities in southern Vietnam.

Nguyen Hong Ph. managed to obtain a driving instructor license and landed a job at the private-run Tien Thanh vocational center, before transport inspectors found that his driving license was not granted by competent agencies.

The man has had the result from his practical driving test rendered invalid, and would have his instructor license revoked.

This is only one instance among many wrongdoings which the Ministry of Transport uncovered following its latest examination of the training, testing and accreditation by local transport departments and 41 driving schools in Ho Chi Minh City and its neighboring provinces, Ninh Thuan, Binh Duong, and Dong Nai, between mid-April and late May.

The ministry inspectors have also taken punitive actions against many of the schools over various irregularities such as failing to sign contracts on training novice drivers, employing unqualified instructors or those with expired licenses, and training student drivers who failed to submit medical certificates.

The administration attributed such instances of misconduct to laxity and negligence in management by the respective transport departments in those localities.

The large-scale inspection was done at a time when many driving schools in Ho Chi Minh City started to be known to offer guaranteed passing of driving tests instead of providing important knowledge for their learners.

These centers often encourage learners to pay additional fees aside from tuition in return for guaranteed success in theory tests required for driver’s licenses.

Those agreeing to pay for the easy exams are now facing an inevitable consequence as they find themselves lacking the necessary skills and knowledge to drive an automobile in real life.

Traffic accidents remain one of the biggest causes of fatalities in Vietnam. Approximately 14,000 people lose their lives each year in the country as a result of road traffic crashes, according to WHO data.