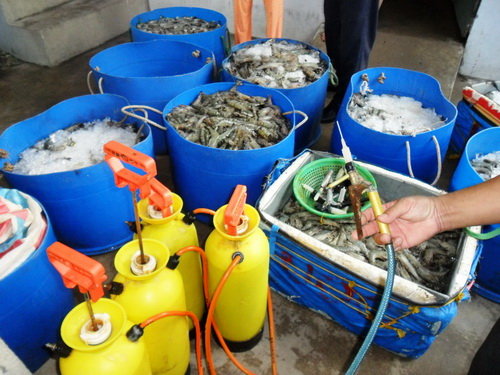 Police discovered dozens of shrimp injected with gel in two shops in north-central Vietnam on Saturday, confirming the public’s long-standing fear of seafood in the country.

Authorities found around 40 kilograms of shrimp contaminated with chemical substances in a fresh-seafood shop named Tinh Luyen and around 20 kilograms in another called Coi Xuyen, in Sam Son, a coastal tourist city of Thanh Hoa Province.

The shrimp were seen having an unusually plumped body and a head filled with dark blue gel at the time of the inspection.

Nguyen Huu Tinh, owner of Tinh Luyen, said he had bought the chemical-logged crustaceans from a local, adding that his establishment sells around 20 to 30 kilograms of fresh shrimp to tourists daily.

Police officers seized all the above shrimp and are having them examined to determine whether they contain noxious substances.

It has not been known which penalty the shops may receive.

As per Vietnamese law, a company offering a product that breaches food safety regulations is liable to a fine up to seven times the product’s value, or may face charges according to the penal code.

Regulators are hunting those who inject shrimp with gel and sell them to shops in the province.

The shrimp injection practice, which is to increase the creature’s size and weight, has been rife in Vietnam during the past several years, prompting the prime minister to launch a crackdown on it in early 2017.

It has also generated greater distrust of consumers toward seafood sold at markets in general, amidst current worries of health risks from chemically adulterated vegetables and fruits produced in the country.