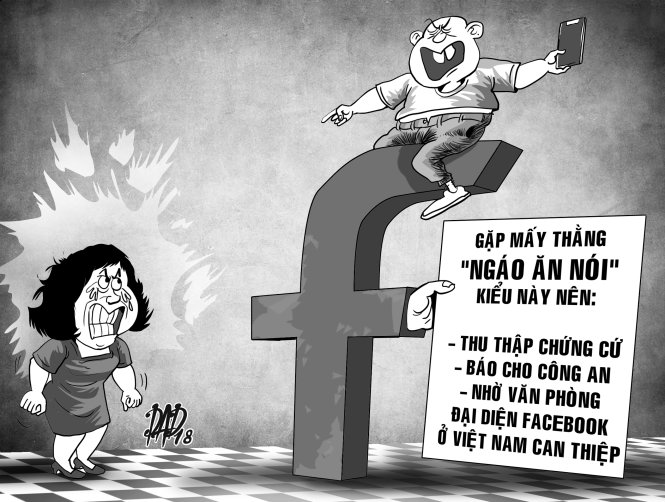 Some Internet users in Vietnam have taken advantage of online anonymity to launch defamatory attacks against individuals and businesses without facing legal consequences, causing great emotional distress and losses to the victims.

H.Q.T., an undergraduate student in Da Nang, has been losing sleep over an online allegation that he had stolen from guests who stayed at a tourist resort owned by his parents in the neighboring province of Quang Nam.

T. was put in charge of the place when a group of guests from Ho Chi Minh City reported that some of their properties had gone missing during their stay.

Both parties have filed a joint police report on the incident.

“However, while the police were still working on the case, a Facebook user named S.N. published a post with a photo of my son accusing him of theft,” said T.’s mother, adding taht S.N. is one of the guests.

The post was made visible to the public and was quickly passed around by other users, who warned others against staying at the property.

“My son is suffering from a severe mental breakdown due to the accusation,” the mother said.

H., director of a hospitality company in Da Nang, shared her own experience being at the receiving end of personal attacks on the Internet that almost cost her her career.

When H. was up for promotion to directorship at the company, a Facebook account published posts accusing her of dating her boss and called her out for lack of management capability.

“My life was turned upside down due to the accusations,” H. said.

“Many of my friends, colleagues and relatives read the post and asked me about them, but I didn’t know what to tell them,” she added.

After some investigation, H. said she could not pinpoint the person behind the personal attacks since the account was only a clone.

“The incident caused huge losses to the business of our company,” H. said.

Nguyen Hung Loi, a senior police officer in Da Nang, advises victims of online slanders to report the abuse to the local police and Department of Information and Communications.

“The victim can take screenshots of the Facebook posts for evidence and have them ratified at a local court bailiff office,” Loi said.

The defamation of others, online or in person, that lead to serious consequences is enough to constitute a criminal offense according to Vietnamese laws, he added.