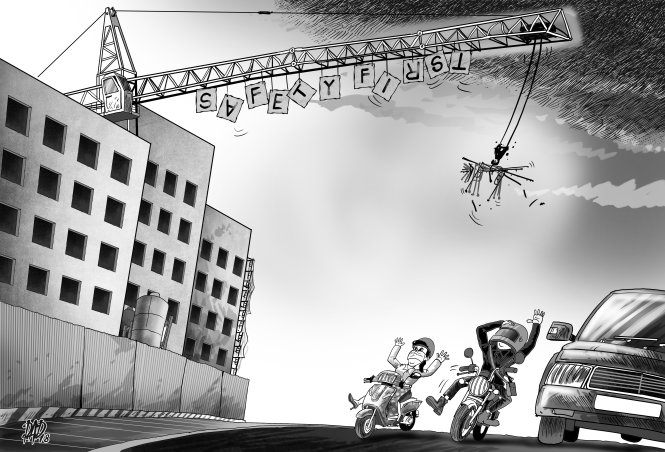 The recent tragic death of a motorcyclist in Hanoi who got hit by a falling metal bar from a nearby under-construction building has once again brought public attention to poor safety standards at construction sites across the country.

The victim, 31-year-old D.T.H., was a single mother who left behind her six-year-old daughter after the unexpected accident on Thursday.

According to official reports from the administration of Thanh Xuan District in Hanoi, H. was riding on Le Van Luong Street when a metal bar from a nearby construction gondola fell apart from the seventh floor onto moving traffic beneath, hitting her and another motorcyclist.

H. didn’t make it through her severe injuries, while the other victim also suffered from minor wounds.

At the construction site for a shopping mall and office building where the gondola system was erected, no protection net was used to cover the unfinished building and its scaffoldings.

Such a sight is not uncommon at similar construction sites in Vietnam, despite effective regulations requiring developers to impose strict safety measures at work.

Earlier this month in Ho Chi Minh City, six members of a family in Tan Phu District narrowly missed death when a metal bar fell through their roof from a next-door construction site and landed in their living room.

Nguyen Thiem, vice president of the Vietnam Association of Construction Contractors, said the developer of the project linked to H.’s death must be held accountable for failure to cover up the construction site and allowing the gondola system to operate above moving traffic.

He added that for any building sites in Vietnam there are always at least two government agencies working together to ensure safety standards are followed, the local department of construction and department of labor, war invalids and social affairs.

Other agencies such as construction inspectors might also be involved, who have the authority to order an immediate halt of construction should violations to labor safety be found.

Repeated offenders can have their construction permit revoked, Thiem said.

Ngo Lam, deputy director of the quality inspection department under Vietnam’s Ministry of Construction, said there are already laws and regulations in place concerning labor safety related to construction works.

The commonplace of construction accidents as reported in the media in recent days were due to lack of compliance on the developers’ part, Lam said.

“Construction inspectors often slap violators with only a small fine or ignore the violations completely, which is not enough to deter them from repeating the violation,” said Dr. Nguyen Van Hiep, former deputy director of Ho Chi Minh City’s Department of Construction.

Meanwhile, lawyer Tran Ba Hoc from the Ho Chi Minh City Bar Association said those responsible for construction accidents can be criminally charged depending on the nature of the incident.

Developers are also required by law to pay for the victims’ hospital fees and funeral costs, if any, as well as compensation for adverse effects on their mental health.