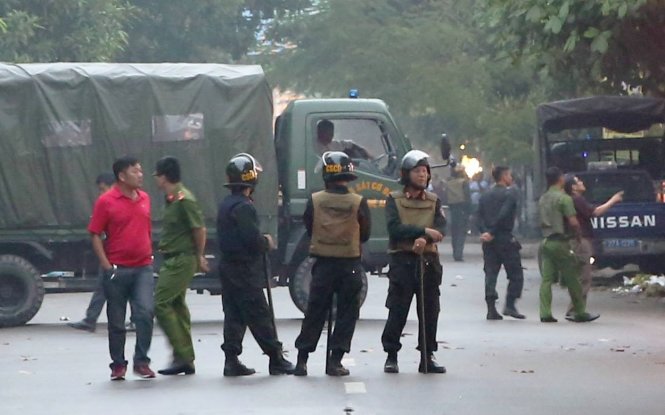 A local man who had locked himself in a two-story house in the north-central Vietnamese province of Nghe Anhas surrendered to police late Monday night, ending a standoff that lasted more than half a day.

Le Ngoc Son, 33, was accused of damaging property after breaking a car’s window.

Knowing that Son was staying in a house on Hong Bang Street in Le Mao Ward in the provincial capital of Vinh, police coordinating with relevant agencies came to the location to execute his arrest warrant at around 10:00 am on Monday.

However, the 33-year-old resisted police offficers and locked himself in the two-story house when they arrived, according to the ward chairman Nguyen Tam Ky.

Son also threw what appeared to be an improvised hand grenade to the law enforcement, but the object eventually did not explode.

Nearly 200 officers from the special, mobile and traffic police forces of Nghe An were dispatched to the scene, cordoning off the location to convince the man to let go of the weapon.

As hundreds of local residents gathered near the scene to watch the incident out of curiosity, police had to extend the blockade to the two ends of Hong Bang Street, and requested the surrounding households to leave the scene.

Shops along Hong Bang Street were also recommended to close.

Some snipers were stationed on the roof of an apartment building some 200 meters from the house for hours.

As the standoff went on for several hours, the police force sought to approach the house, even bringing his family in to persuade Son to surrender and get rid of his weapon, but the negotiation did not work.

What was worth noticing is that Son still posted a status on his personal Facebook account in an apparent challenge to police when he was hiding in the house. “So it is raining heavily, why don’t you just come in? I’ve already been ready for a while," the Facebook post read.

As it was only a few minutes before midnight, the suspect suddenly gave up as he left the house and handed himself to police, ending a 12-hour deadlock.

He was quickly taken to the police station for investigation.

According to the Vietnam News Agency, the main subject of the police capture was another man, who is now wanted for drug trafficking and was believed to be hiding with Son in the house.