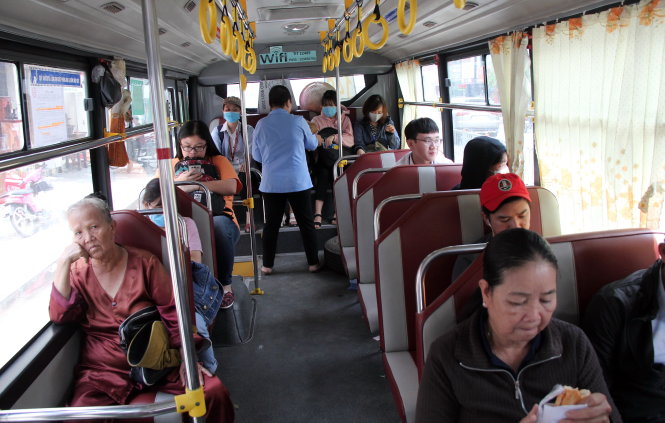 More and more people are less inclined to travel by bus in Ho Chi Minh City despite local authorities’ efforts to promote the form of public transportation.

A probe by Tuoi Tre (Youth) newspaper revealed that the municipal administration has spent trillions of dong (VND1 trillion = US$43.1 million) every year on bus subsidies and adding brand new vehicles to the fleet.

The attempts, however, did not prove effective as the number of buses is still plummeting.

Over the course of four years from 2013 to 2017, the annual number of bus goers in the southern metropolis lowered from 315 million to 223 million, a 30 percent drop.

This number was only 96 million in the first six months of 2018, down by 16 percent year-on-year, Le Ngoc Thuy Trang, deputy director of the municipal Department of Finance, said during a meeting in early September.

The average number of passengers on one bus also went down from 45 to 32, Trang added.

“The entire route stretches 18 kilometers and there were only two or three passengers on some days, who were mainly college students,” Long, the bus driver, sighed.

According to the Management and Operation Center for Public Passenger Transport, at least four bus routes have been shut down due to a lack of passengers since August 2017.

Meanwhile, an expert on transport believed that many people have opted for tech-based transportation services for shorter journeys thanks to their convenience.

Nguyen Van Trieu, president of a transport cooperative, backed the opinion, asserting that many university students, who were previously frequent bus passengers, even decided to work part-time as drivers of such ride-hailing services as Grab and Go-Viet.

Another pundit said that discount policies of these services sometimes made their fares even lower than those of buses.

According to Le Trung Tin, a former official of the municipal Department of Transport, the decrease in the number of bus users can also be blamed on poor-quality service, congestion, and an absence of exclusive lanes.

In order to improve the situation, investment in new buses and traffic infrastructure should be carried out, Tin suggested.