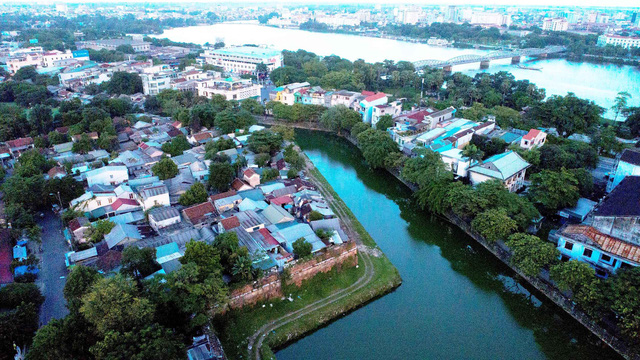 Over 4,200 households with nearly 20,000 residents are about to be relocated for the reservation of the Citadel of Hue, a national relic and world heritage site in central Vietnam.

Experts believed this is the largest-scale relocation in Hue Imperial City’s history of construction and renovation.

Located in Thua Thien-Hue Province, the Citadel of Hue is part of the Complex of Hue Monuments, which was recognized as a UNESCO World Heritage Site in 1993.

In order to preserve the site, nearly 20,000 people living here will have to resettle in other locations.

Most of the residents are workers living in difficult conditions.

Poverty is among the main reasons why these people chose to endure a harsh life here over the past 50 to 70 years.

Many houses are small, old, and degraded. Those who managed to save some money are not allowed to renovate their homes as that is not permitted within a national relic.

“We were very happy when the state announced the relocation. It has been our wish for generations,” said Dang Van To, one of the locals.

The expenditure for compensation and site clearance is estimated at VND2.8 trillion (US$120.6 million), which is funded by the national budget.

Authorities in Thu Thien-Hue will spend VND1.36 trillion ($58.6 million) from the local coffers on building new homes for the affected residents.

A special mechanism also allows provincial authorities to spend one-third of the admission fees at the Complex of Hue Monuments, about VND300 billion ($12.9 million) a year, on implementing the project.

Many residents have also voiced their concern about their new life following the relocation.

Those who have been earning a stable living as cyclo drivers, street vendors, and veggie farmers are wondering if they will be able to have proper jobs at their new homes.

“I fully support the plan, but the state should consider assisting us in finding a new job as well as continuing education for our children,” Nguyen Van Hong, a resident, stated.

Many others are worried if they will be compensated due to the lack of documents proving the ownership of their current houses.

According to Nguyen Anh Tuan, deputy director of the Center for Land Development in Hue City, an agency in charge of site clearance within the project, there are many different groups of people among the 4,200 affected households.

Special policies will be established to provide the most favorable conditions for the residents, Tuan stated.

The first step is to collect necessary information from all of the targeted people, based on which suitable policy frameworks and compensation will be determined, he added.