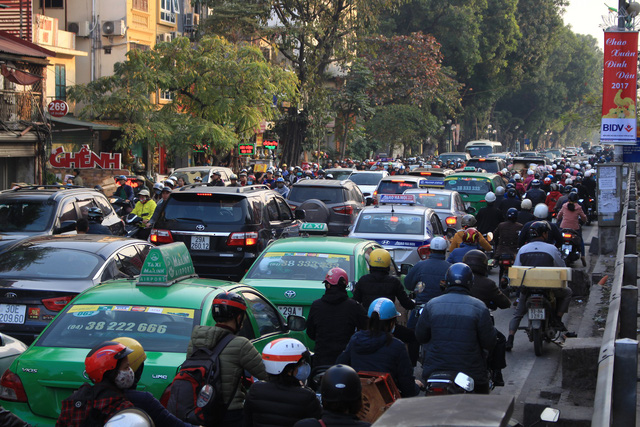 Authorities in Hanoi are planning to channel more than US$1.27 billion into constructing new parking lots over the next seven years to combat overcrowding in the city’s existing parking facilities.

The capital currently has 590 parking venues spanning a combined 37.88 hectares, local authorities said in a document submitted to the Ministry of Transport and the Ministry of Construction.

An additional 562 locations along sidewalks and in roadways have also been zoned for parking.

Meanwhile, there are about 5.8 million vehicles in the metropolis, including 5.25 million motorbikes and 480,000 automobiles.

Existing parking facilities can only serve ten percent of the demand from local residents.

In order to cope with the situation, the municipal administration has set a goal to establish 1,480 brand new parking lots with a combined area of over 1,197 hectares.

About 133 bus stations and 88 truck stations covering 520 hectares are also included in the plan.

Upon completion, about 66 percent of the city’s parking demand will be met.

During the first phase of the scheme, from now to 2025, local authorities are expected to spend approximately VND29.87 trillion ($1.27 billion) on building 204 parking lots in downtown areas.

The expense will be funded by both the city budget and the private sector.

Five passenger bus stations will also be built at a cost of VND2.3 trillion ($98 million).

During the 2025-30 period, another VND242.3 trillion ($10.3 billion) is anticipated to be spent on constructing the rest of the parking lots as well as bus and truck stations.