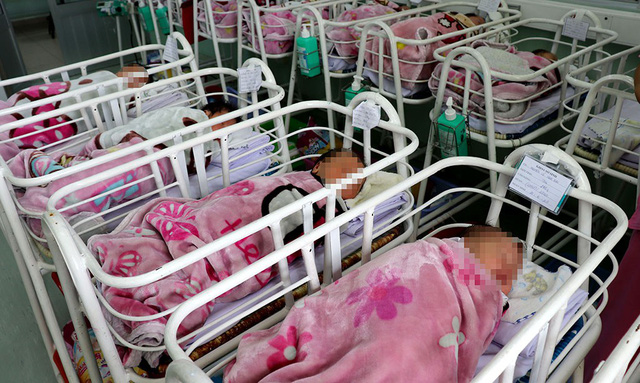 Major maternity and pediatric hospitals in Ho Chi Minh City are becoming overloaded with newborn babies, prompting managers of the infirmaries to seek for an urgent and effective solution to the issue.

According to the observation of Tuoi Tre (Youth) newspaper reporters, the situation can be noticed at major maternity hospitals such as Hung Vuong and Tu Du and at the Children's Hospitals 1 and 2.

Tu Du, one of the oldest maternity hospitals in the metropolis, received and treated about 7,440 newborns in the first nine months of this year.

The infirmary’s neonatal unit is designed to have a capacity of 192 beds. However, about 250, sometimes up to 300, babies have been recorded at the facility at a time.

The same situation also happens at the Children's Hospital 1, located in District 10, whose 210-bed neonatal special care unit always has to serve about 250 to 300 newborns at a time.

The overload can be attributed to the fact that these infirmaries have been receiving patients not only from Ho Chi Minh City but also from other provinces in southern Vietnam.

“It is much safer to have your baby delivered at a major hospital in Ho Chi Minh City,” Nguyen Thi Nguyet, a 62-year-old resident from the Mekong Delta province of Tien Giang, said as she was waiting for her five-day-old grandchild to be vaccinated at Tu Du Hospital.

At the Children's Hospital 1, most newborn patients also come from other localities rather than from Ho Chi Minh City.

Tang Chi Thuong, deputy director of the municipal Department of Health, has recently warned of the situation, urging relevant agencies to deal with the problem to ensure service quality for all patients.

A representative from Tu Du Hospital stated its managers have been applying certain measures to shorten the time needed for each newborn to stay at the facility.

They have also supported programs to train and improve the skills of doctors in neighboring provinces.

Hung Vuong, another major maternity hospital in the southern hub, has been trying to minimize the number of infants treated at its neonatal special care unit.

According to Ngo Ngoc Quang Minh, deputy director of the Children's Hospital 1, the infirmary has been improving its services to reduce the treatment time for each patient.

Doctors have been assisting their co-workers at hospitals in other provinces in patient diagnosis and consultation via telephone and the Internet, Minh continued.

Thanks to this approach, parents would rest assured their children are in good hands and no longer need to seek treatment for their kids in Ho Chi Minh City if their conditions are not serious, he added.