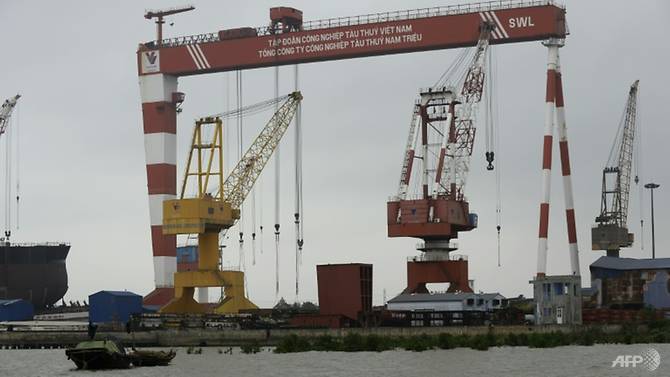 Two executives from a near-bankrupt state-run shipbuilding company have been arrested in Vietnam on accusations of embezzling US$4.5 million in collusion with a scandal-plagued bank, as the country broadens its unprecedented corruption crackdown.

The once high-rolling bigwigs are the latest ex-officials ensnared in a tangled web of corruption cases linking several state-run firms to banks accused of mismanagement and graft.

Dozens of bankers, businessmen and former officials have been jailed as part of the anti-graft campaign waged since 2016.

Truong Van Tuyen, the former director of Vinashin - a once-massive firm saved by the state from collapsing under heavy debt in 2010 - and current deputy director Pham Thanh Son were arrested Monday, the ministry of public security said in a statement.

They were being investigated for "abusing position and power to appropriate assets", it added.

The pair is accused of illegally approving deposits into Ocean Bank, a private bank embroiled in its own corruption scandal that has seen dozens convicted.

Tuyen and Son allegedly pocketed $4.5 million along with a former Vinashin chief accountant who is already behind bars.

The disgraced shipbuilding firm was once a crown jewel among Vietnam's 500 or so state-run enterprises.

But a series of missteps involving investments in the real estate and energy sectors ultimately hobbled the huge firm with heavy debts, nearly collapsing it in 2010.

The state stepped in to save it, and today the slimmed-down company still makes ships but had dropped its side ventures.

The firm has already been crippled by corruption scandals.

Two former executives of Vinashinlines, a Vinashin subsidiary, were sentenced to death for embezzlement last year after they were found guilty of stealing $11.3 million in shipping deals made between 2006 and 2008.

Vietnam has long vowed to quash rampant corruption, but observers say the current campaign to jail graft-prone officials is unprecedented in its scope and scale.