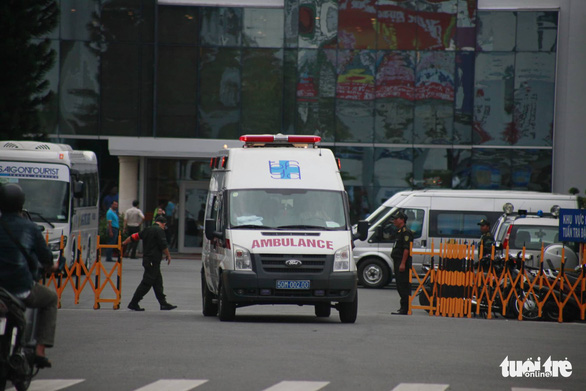 Nine survivors of a terror bomb attack that hit a tour bus carrying 15 Vietnamese nationals in Cairo last week have arrived home safely on a flight that landed in Ho Chi Minh City from Egypt on Tuesday.

The December 28 blast from a roadside bomb killed two tourists and a guide, all of whom were Vietnamese nationals, while injuring the other twelve passengers.

No claim of responsibility has been made for the terror attack that took place less than four kilometers from Egypt’s world-famous Giza pyramids.

Vietnam’s foreign ministry has vehemently condemned such an act of terror and demanded that Egypt find and punish those responsible for the attack.

The first nine survivors of the bombing who are in stable conditions to travel by air were brought home on the Turkish Airlines flight TK 168, which landed at Tan Son Nhat International Airport in Ho Chi Minh City at around 5:00 pm on Tuesday.

Two of them suffer from psychological trauma and are still being monitored by doctors at a hospital in the city.

The three remaining survivors continue to stay in Egypt for treatment for the severe injuries they sustain from the blast.

One of them had to undergo a surgery to fix both of their wounded legs, according to Bui Ta Hoang Vu, director of the Ho Chi Minh City Tourism Department.

The bodies of the three Vietnamese citizens who died in the attack are expected to be repatriated on Wednesday, said Nguyen Huu Y Yen, general director of travel company Saigontourist which operated the victims’ Egypt tour.

Both Vu and Yen were on Tuesday’s flight that brought the first group of Vietnamese tourists home.

Yen said Saigontourist is ready to work with families of the deceased on arranging their funerals.

“We are working actively with our partner insurance company to move ahead with paying insurance to those harmed while on the tour,” said Vo Anh Tai, deputy general director of Saigontourist.

“We will provide further details once an agreement is reached on the amount of payment,” he added.

A Saigontourist representative said the company has assigned personnel to remain in Egypt to assist those still hospitalized after the attack.

If all goes well, the remaining three survivors can board a flight home as early as the end of this week, the representative said.

Vietnamese authorities have conducted a survey of the route on which the tour bus was moving when it got hit and found that the road is regularly used for transporting tourists to the Giza pyramids, with no danger signs to warn travelers of risks of an attack, Vu said.

However, an official conclusion from Egyptian investigators is still needed to determine whether the bus was in an undesignated area, he added.

“The incident was unexpected,” Vu said.

“The bomb attack was not particularly aimed at Vietnamese tourists.”