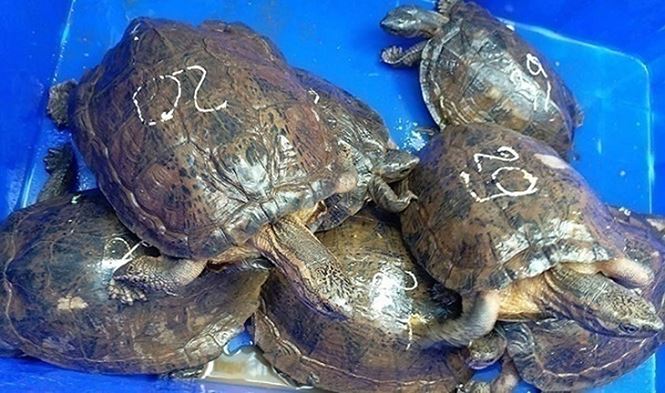 Police in Vietnam’s Central Highlands have slapped a fine of VND290 million (US$12,470) on a woman for illicitly trading rare and endangered turtles.

Pham Thi Tam, 39, who resides in An Nhon Town in the south-central province of Binh Dinh, was fined for illegally buying and selling rare and endangered wildlife, officers confirmed on Thursday.

Big-headed turtles are listed as an endangered species by the IUCN Red List as a result of population declines.

On November 4, 2018, police in the Central Highlands province of Kon Tum caught a man red-handed transporting the animals in an automobile.

An investigation later revealed that Tam was the owner of these turtles.

The woman said she had sourced them from different people, whose identities are unknown, in the Mekong Delta province of Dong Thap.

Law enforcement rescued all the turtles and transferred them to the conservation center of Chu Mom Ray National Park in Kon Tum for further care before they are released to their natural habitat.

A group of nine people, aged from 25 to 49, was apprehended by police in the north-central province of Ha Tinh on Wednesday afternoon for storing and trading 215 pangolins collectively weighing 600 kilograms.

Officers also confiscated an elephant tusk weighing about one kilogram.

Pangolins in Vietnam are considered highly vulnerable to extinction, according to Save Vietnam’s Wildlife, a nonprofit acting for wildlife’s sake, though trafficking the species remains lucrative due to perceived medicinal properties.