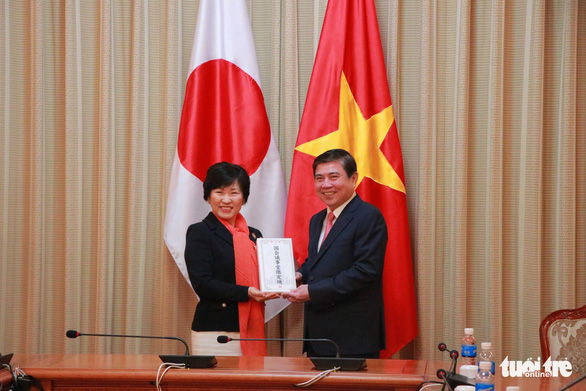 Ho Chi Minh City chairman Nguyen Thanh Phong has promised to use the city’s own money to pay Japanese contractors working on a project to build its first metro line before the Lunar New Year while waiting for budget allocation from the central government.

Phong made the pledge at a meeting on Friday afternoon with Toshiko Abe, Japanese State Minister for Foreign Affairs, during the latter’s working visit to the southern metropolis.

However, due to multiple procedural challenges including approval of the project’s adjusted investment plan, payment of Japanese contractors involved in developing the metro line had been delayed, he elaborated.

While waiting for the new budget to be approved, Ho Chi Minh City will spend around VND2 trillion (US$86 million) of its own money paying the Japanese contractors, Phong said.

“The city and relevant bodies are in the final steps of getting the budget disbursed,” he said.

“We will try our best to pay any unpaid contractors’ wage before entering the Tet holiday, which means by February 1, 2019,” Phong pledged.

Other remaining obstacles slowing down development of the metro line will also be resolved in the fastest manner on the principle of protecting the contractors’ rights and interests, with the ultimate goal being to have the line ready and start operations at the end of 2020 as planned, the Ho Chi Minh City chairman said.

The Japanese ambassador warned “constructions on the project will have to be halted” if the issue is not resolved by the end of 2018.

It is estimated to cost VND47.3 trillion ($2 billion) in investment capital, and will be capable of transporting 620,000 passengers per day upon completion.

In response to chairman Phong’s uplifting promise, Japanese State Minister for Foreign Affairs Toshiko Abe said “thank you” in Vietnamese and said she considers the gesture a meaningful Lunar New Year present that the city had prepared for the Japanese government and businesses.

“Yesterday, when I arrived in Hanoi, I visited the Vietnam Military Hisotry Museum and was really moved and humbled by the perseverance of Vietnamese soldiers and people during the war,” Abe said.

“It gave me faith in Vietnam, that with determination your country can have anything done despite the difficulties,” she said.