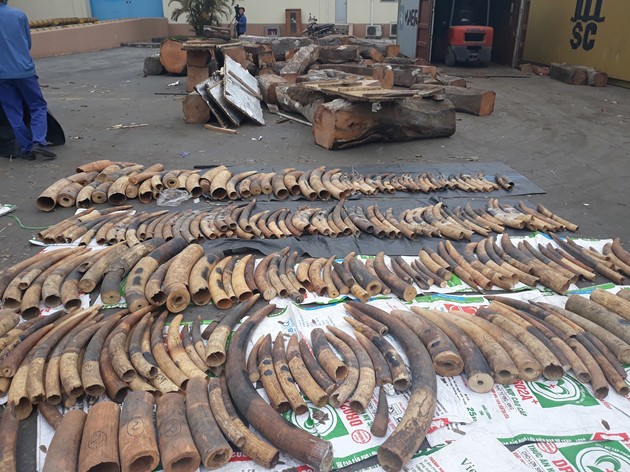 Two metric tons of elephant tusks and pangolin scales were seized by customs officers in Hai Phong City in northern Vietnam as they inspected a suspicious container from Africa on Friday.

The container arrived at the Tan Vu – Lach Huyen Port in Hai Phong on January 18, declared as a shipment of logs originating from Nigeria.

The automatic customs clearance system sorted the shipment into the red channel, which requires additional screening using a cargo scanner.

The container was transported to a cargo scanning center in Hai Phong, where customs officers found it suspicious and decided to conduct a thorough manual inspection into the content.

After removing two layers of logs used as distraction, officers found six wooden crates containing over half a metric ton of elephant tusks and more than 1.5 metric tons of pangolin scales.

It was the largest single seizure of smuggled elephant tusks and pangolin scales in Hai Phong in years, according to local authorities.

Trading of the animal parts are illegal in Vietnam, which is a signatory of the Convention on International Trade in Endangered Species of Wild (CITES).

The crime carries a prison term of up to 12 years according to Vietnamese laws.