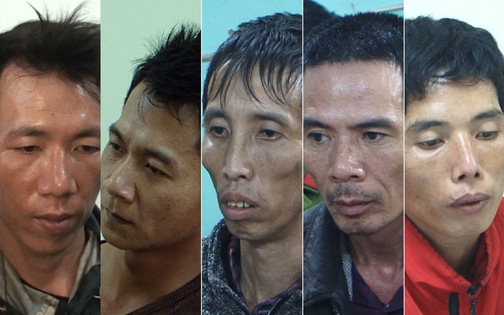 A gang of five men held a young woman hostage for days, took turns to rape her before killing the victim in the northern Vietnamese province of Dien Bien early this month, police said as they wrapped up a week-long probe into the case that sent shockwaves through the country on Monday.

Dien Bien police on Monday held a press conference to release for the first time the full results of their investigation into the murder of Cao Thi My Duyen, a 22-year-old college student who was found dead on February 7, days after she went missing.

Officers said they had arrested and launched criminal investigation against all five suspects in the case.

Duyen, who helped her mother run a poultry stall at a local wet market, was last seen delivering 13 live chickens to a customer on the afternoon of February 4, said Sung A Hong, Dien Bien police chief.

Her mother reported to police her daughter’s disappearance later the same day after multiple failed attempts to reach Duyen on her phone, Hong said.

A search for Duyen was launched and her body was eventually found three days later, on the morning of February 7, inside a pigpen at an abandoned house that was a one-hour drive from her home in Dien Bien.

Duyen’s body was found half-naked, wearing only a long-sleeved top and underpants, with her face covered by a helmet, police said.

The first police autopsy showed the young woman was killed by strangling.

The murder shocked the country and sparked disturbing rumor that Duyen had been gang-raped before being killed.

The rumor has now been confirmed by police, who told the press on Monday that the men admitted to abducting and raping the young woman before strangling her to death.

On February 10, Dien Bien police arrested and launched a probe against Vuong Van Hung, the customer who had bought the chickens and asked for them to be delivered by Duyen on the day she went missing.

Hung was initially placed under investigation for “murder” and “property appropriation," as police said evidence was insufficient at the time to subject him to another charge.

On Sunday, Dien Bien police and Ministry of Public Security specialists unearthed the corpse of Duyen for a second autopsy after finding the suspects’ testimonies conflicting with earlier autopsy results.

According to the provincial police chief, Bui Van Cong and Vuong Van Hung have been identified as the masterminds behind the kidnap and murder of Duyen.

The duo had elaborated on a robbery plan that involved setting Duyen up to deliver chickens to a deserted place to appropriate her assets.

After Duyen arrived at a designated address in the provincial capital of Dien Bien Phu on February 4, Hung used a nunchaku to strangle her until she passed out.

He then called Cong and Nhiem to the abandoned place and the three of them took turns to raped the student’s body.

Duyen was then locked inside the back of a truck owned by Cong and driven to the man’s house.

On the morning of February 6, Luong Van Hung and Luong Van La visited Cong’s house, climbed into the back of his truck and raped Duyen.

Noticing that Duyen’s health was deteriorating quickly, the suspects got together on the same afternoon to plot her murder, committing it and disposing of the victim’s body at another abandoned house in rural Dien Bien District, around 30 kilometers from her home.

“The suspects employed sophisticated tricks to erase evidence and used their alibis to cover up the crime,” Hong, the Dien Bien police chief, said on Monday.