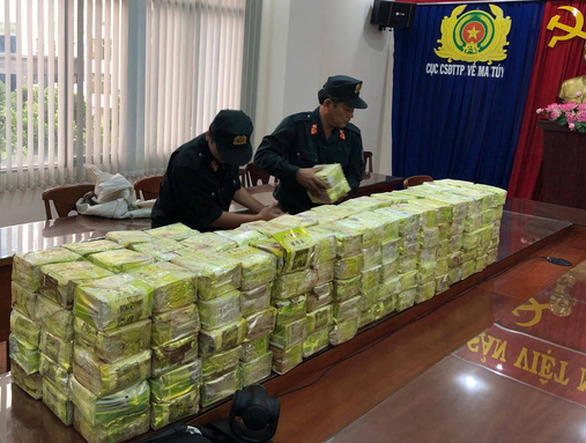 Police in Vietnam have just seized approximately 300 kilograms of crystal meth and arrested several suspects in their bust on a large-scale drug ring comprised of Vietnamese, Chinese, and Laotian nationals.

Officers caught the suspects transporting the crystal meth on a pickup truck in Ho Chi Minh City on Wednesday afternoon – a serious breakthrough in their months-long investigation.

The bust was the result of a joint effort by officers under the Ministry of Public Security, the anti-smuggling unit of the General Department of Vietnam Customs, and other police departments in Ho Chi Minh City, the Central Highlands province of Dak Nong, and Tay Ninh and Bing Duong Provinces in southern Vietnam.

The same day, law enforcement also inspected five warehouses in Ho Chi Minh City and Dak Nong which they suspected were connected to the ring.

A total of 11 suspects, including eight Chinese nationals and three Vietnamese, were apprehended in the raid.

According to officers, the ring members have been smuggling narcotics from Laos into Vietnam via the Bo Y Border Gate in the Central Highlands province of Kon Tum.

The group purchased the products from Laotian individuals and brought them into Vietnam to either distribute domestically or to ship to a third country.

Vietnam enforces a very harsh drug law, as anyone caught with over 600 grams of heroin or more than 2.5 kilos of methamphetamine can face the death penalty.