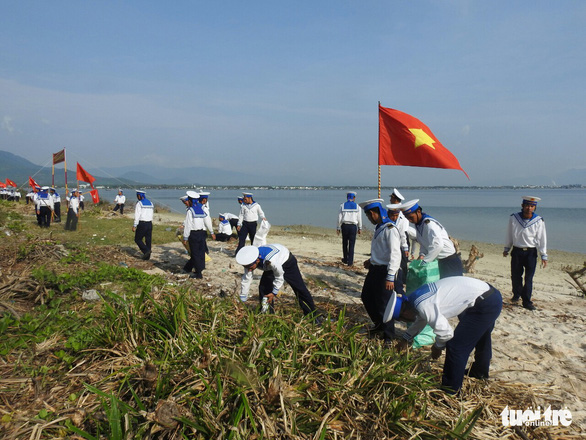 5,000 naval soldiers clean up trash along beaches in south-central Vietnam

About 5,000 naval soldiers joined hands to collect garbage along beaches in the south-central Vietnamese province of Khanh Hoa on Sunday.

Young soldiers from the 4th Regional Command under the Vietnam People’s Navy participated in the cleanup of approximately 30 kilometers of beaches in the Cam Ranh Peninsula and Truong Sa (Spratly) archipelago, about 248 nautical miles east of Cam Ranh.

More than ten metric tons of trash was collected at the end of the day.

According to Colonel Nguyen Huu Minh, an official of the 4th Regional Command, the effort was one of many meaningful activities carried out by young members of the Vietnam People’s Navy in March.

The garbage clearing is part of the beach cleanup campaign initiated by the Ho Chi Minh Communist Youth Union, which is aimed at encouraging young people to protect the oceans and the environment in general.

The Vietnam People’s Navy consists of five regional commands in charge of five coastal areas across the country.