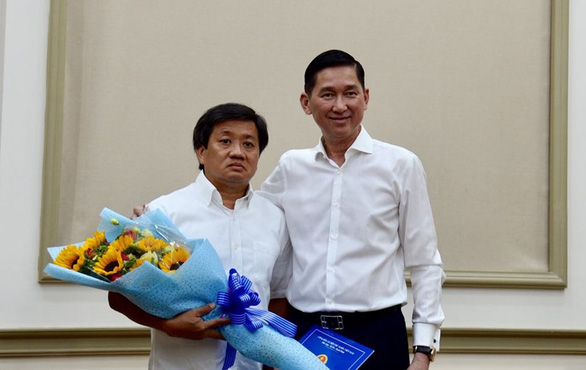 Hours after being assigned a new job at a state-run company on Tuesday, former District 1 vice-chairman Doan Ngoc Hai has tendered his resignation, citing lack of qualifications.

Hai, most widely known for leading a ‘sidewalk clearing’ campaign in Ho Chi Minh City in 2017, was on Tuesday morning named deputy general director of the Saigon Construction Corporation (SGCC).

The appointment was against his “personal aspirations," Hai said at a ceremony on the same day, adding that he lacks qualifications for the new job.

He said as a Party member he had to comply with assignments given by his overseeing Party organ.

Speaking to Tuoi Tre (Youth) newspaper on Tuesday afternoon, Hai said he had turned in his resignation and wished to make no further comment on the decision.

This is the second time Hai has requested to resign in less than two years.

In January 2018, a year after launching his signature sidewalk clearing campaign, Hai handed in a letter of resignation from all positions in the District 1 administration, keeping a promise made at the start of his campaign that he would resign if order was not restored to the downtown district’s sidewalks.

“My actions had interfered with the interests of the many parking lots, hotels, restaurants, and households that reaped huge profits from the district’s sidewalks, as well as those of a significant number of officials who have a symbiotic relationship with those violators,” Hai wrote in the letter.

He retracted his resignation letter in May 2018, saying he still wanted to devote his efforts to the development of the city and was willing to take on any new tasks at even the most dangerous and challenging places.

During many discussions with city leaders since then, Hai has made clear his wish to serve in Can Gio, one of Ho Chi Minh City’s rural and poorest districts, he said at Tuesday’s ceremony.

While his requests received no answer from city leaders, they repeatedly offered him positions irrelevant to his area of expertise, he said.

These offers included making him deputy head of the city’s food safety watchdog and general director of the Saigon Jewelry Company Limited (SJC), which is wholly owned by the Ho Chi Minh City People’s Committee.

While reluctantly accepting their latest offer to be SGCC deputy general director, Hai said he did not have any qualifications or prior training in engineering in order to perform well as the leader of a construction company.

In his second resignation letter submitted on Tuesday afternoon, Hai said he would risk causing “grave consequences” working a job that is neither his “forte, expertise nor passion."

“It would damage the reputation of the Party and be a waste of the people’s money,” Hai wrote in the letter.

Hai said he would take a two-month unpaid leave while waiting for his resignation to be processed.

At age 50, Hai is not up for retirement in another ten years according to Vietnamese law.

Ho Chi Minh City deputy chairman Tran Vinh Tuyen said any resignation by an official at Hai’s level must be approved by the municipal Party organ.