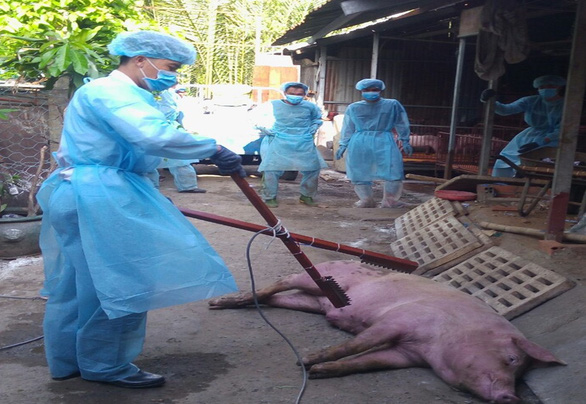 An African swine fever (ASF) outbreak has been reported in an outlying district of Ho Chi Minh City, making the southern metropolis the 55th Vietnamese locality to be affected by the epidemic.

The swine herd of Le Thi Ngoc Cam in Phu Huu Ward, District 9 was discovered having typical symptoms of the disease, which is fatal to animals but not harmful to humans, on Monday.

The city’s department of livestock production and veterinary medicine has carried out an examination and all of her herd tested positive for ASF.

A total of 163 infected pigs have been culled and all of the remaining animal feed at Cam’s facility was disposed of, Nguyen Phuoc Trung, director of the municipal Department of Agriculture and Rural Development, confirmed on Tuesday, adding that the farm had been thoroughly sanitized.

This is the first-ever ASF outbreak in Ho Chi Minh City, Trung stated.

Local authorities are working to figure out how Cam’s pigs were infected.

All possible measures have been taken to prevent the epidemic from spreading to other neighborhoods.

“District 9 is not the primary source of pork in the southern metropolis, thus this particular outbreak does not affect the local pork market,” Trung assessed.

According to the Department of Animal Health under the agriculture ministry, the ASF epidemic, for which no vaccine exists, has hit 55 out of 63 provinces and cities across Vietnam.

Over 2.4 million pigs weighing a total of 146,000 metric tons have been culled as of Monday.

The disease was first uncovered in the northern provinces of Hung Yen and Thai Binh in mid-February.

The ASF outbreak is threatening to expand to the rest of the country as the virus remains dormant in the environment for a long time and can spread through complex and varied means, according to Minister of Agriculture and Rural Development Nguyen Xuan Cuong.