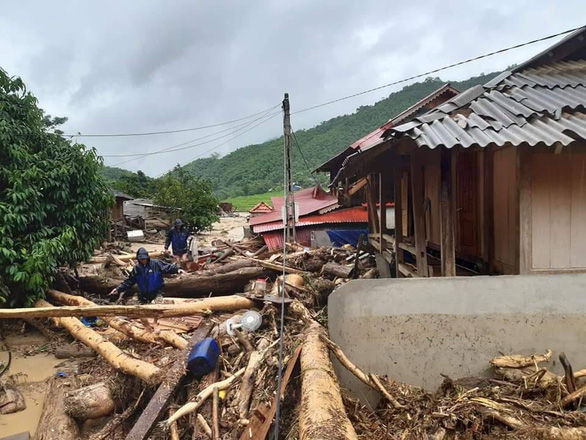 At least two were killed and 13 others were nowhere to be found as of Saturday evening, after Tropical Storm Wipha and its circulation brought about massive rainfall, flashfloods, and landslides in northern and north-central Vietnam.

Wipha, the third storm to strike Vietnam this year, made landfall in the northern province of Quang Ninh on Friday night, unleashing winds at 60 to 75km per hour and gusts at up to 100km an hour.

Although it quickly weakened into a tropical depression, heavy downpours still lashed multiple provinces and cities in the northern and north-central regions.

According to the Central Steering Committee for Disaster Prevention, rainfall of between 200 and 330 millimeters was recorded in the affected localities.

In the northern province of Bac Kan, a rockslide occurred along National Highway 3 on Saturday afternoon, killing a 76-year-old woman and injuring two other residents.

A total of seven communes in mountainous Quan Son District, located in the north-central province of Thanh Hoa, were isolated by floods.

Twelve people have been unaccounted for as a result.

In Muong Lat District, Thanh Hoa Province, one person was killed and another went missing after being swept away by floodwaters.

In Hanoi, multiple streets were inundated for long hours due to prolonged rain, while strong winds also uprooted many trees across the capital.

A total of 32 houses were destroyed and more than 220 others damaged throughout the affected regions.

Prime Minister Nguyen Xuan Phuc has ordered authorities in the affected localities to deal with the consequences and search for the missing victims in an urgent manner.

According to Mai Van Khiem, director of the National Center for Hydro-meteorological Forecasting, the storm circulation will continue bringing torrential rain to northern and north-central Vietnam on Sunday and Monday.