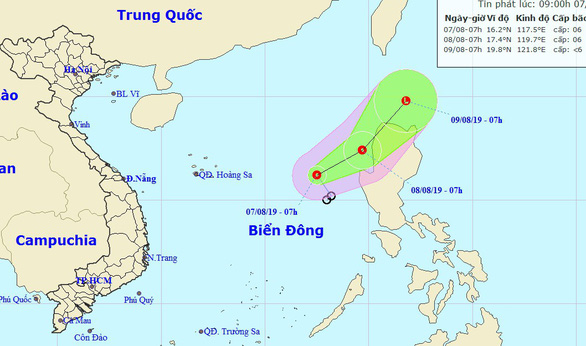 Rain to batter Vietnam due to tropical depression, monsoon

A tropical depression in the East Vietnam Sea, along with an enhanced monsoon, has been forecast to bring heavy rains and thunderstorms to provinces in southern Vietnam and the Central Highlands over the next days.

The low-pressure system was located 560 kilometers southeast of Vietnam’s Hoang Sa (Paracel) archipelago as of 7:00 am on Wednesday, packing winds at 40 to 50km per hour and gusts at up to 75km an hour, according to the National Center for Hydro-meteorological Forecasting.

It is expected to travel northeast in the next 24 hours and will be located 100 kilometers west of the Philippines’ Luzon Island on Thursday morning.

Under the combined effects of the tropical depression and strengthening monsoon, downpours accompanied by strong gusts and thunderstorms are forecast to dampen southern Vietnam, including Ho Chi Minh City, and the Central Highlands from August 7 to 9.

Average rainfall will be about 40 to 70 millimeters per 24 hours.

It can reach up to 120 millimeters per 24 hours in some locations.

Rain will pelt mainly in the evening.

Showers, thunderstorms, and rough seas will occur along the coastline between south-central Binh Thuan Province and southern Kien Giang Province during this period.