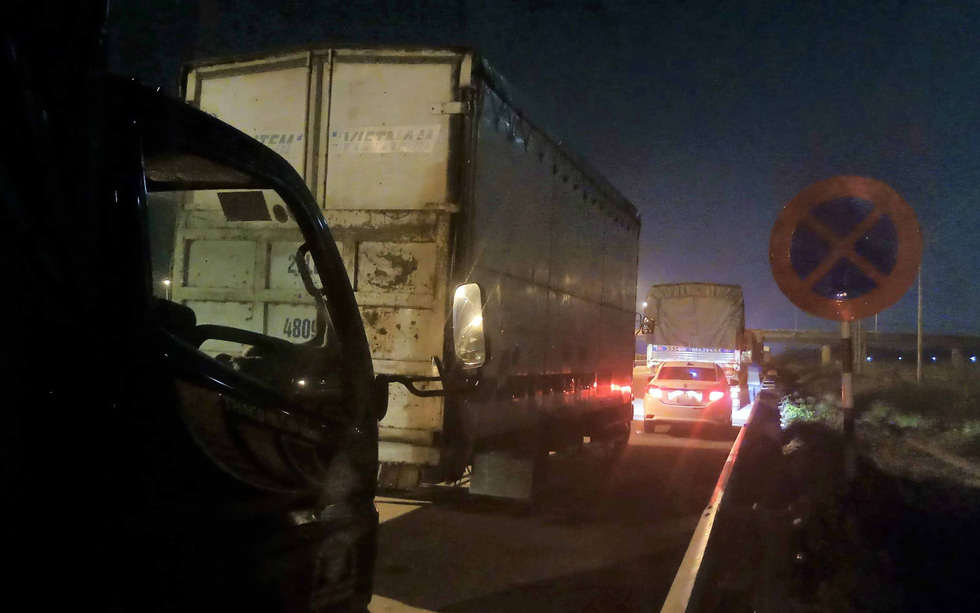 An expressway in southern Vietnam has become a favorite place for long-haul truck drivers to take their nighttime break, posing high risks of traffic accidents despite authorities’ efforts to fine violators.

The situation occurs along the Ho Chi Minh City-Trung Luong Expressway, which connects the southern metropolis with the Mekong Delta province of Tien Giang, and is believed to have begun at the beginning of this year.

“This happens almost every time I travel along this route at night,” said Nguyen Van Tung, a truck driver from Tien Giang.

Many trucks and trailer tractors are often parked along the hard shoulder as the drivers take a nap inside the cabins.

Some made it even more dangerous by infringing upon part of the primary lane.

“I often drive at up to 100km an hour along the expressway but always have to slow down when passing these sections,” Tung elaborated.

According to the observation of Tuoi Tre (Youth) newspaper reporters, the illegal parking mainly happened near the rest area of the expressway in Long An Province.

As the resting facility had already been filled with vehicles, other drivers decided to stop along the nearby hard shoulder.

The violation could be noticed along both directions of the expressway.

According to one of these drivers, they have to take a nighttime break to continue their journey in the next morning as scheduled.

“This is the last resort as we have no other option. If we continue driving while feeling exhausted, we will likely cause an accident,” the trucker stated.

“It is not comfortable sleeping inside the cabin, plus we sometimes get fined by traffic police officers.”

Meanwhile, taking a break along regular streets may result in the drivers getting robbed, he added.

Local authorities began placing signboards and issuing warnings for violators in the first quarter of this year, said Le Vinh Phuc, an official from the Ministry of Transport.

Traffic police started fining offenders in April, Phuc continued, adding that nearly 1,000 cases have been detected over the past four months.

Nguyen Van Thanh, an official at the Directorate for Roads of Vietnam, attributed the situation to the lack of rest areas along the expressway.

There are only two rest areas, whose capacity is not sufficient to meet the demand, Thanh stated, adding this is why the illegal parking keeps happening despite the fines.

According to Pham Cam Thuy, who represents the developer of the expressway’s rest areas, proper parking lots will be opened at the facilities in about two months, providing more space for truck drivers to park their vehicles.

Stretching 62 kilometers, the six-lane Ho Chi Minh City-Trung Luong Expressway was open to traffic in February 2010. The fastest allowed speed is 120km per hour and the slowest is 60km per hour.

They are situated on each direction of the expressway in Thu Thua District, Long An Province.