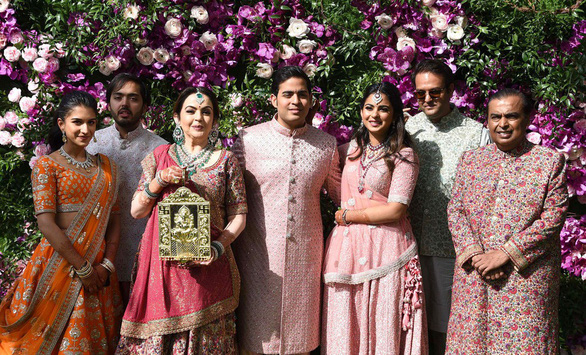 Vietnam’s beautiful destinations continue to win over Indian billionaires’ hearts as a deep-pocket couple has chosen the central city of Da Nang to hold their extravagant wedding, after a handful of other rich Indians booked Phu Quoc, an island off the southern province of Kien Giang, to be the venue for their wedding ceremonies.

The Department of External Affairs of Da Nang said on Saturday that an Indian businessman had selected the central Vietnamese city to organize his daughter’s wedding at the end of this month, following a recommendation by the Vietnamese Embassy in India.

The billionaire family booked a seaside resort in Ngu Hanh Son District to be the wedding venue, according to Nguyen Cong Tien, deputy director of the municipal external affairs department.

Around 700 guests will fly in to Da Nang to attend the wedding, while 55 top chefs from India will serve the event, Tien said.

According to Vietnamese Ambassador to India Pham Sanh Chau, Da Nang is one of the most well-qualified destinations in Vietnam to host the million-dollar wedding of Indian billionaires thanks to its picturesque scenery and the development of five-star hotels that can accommodate about 700 to 1,000 guests at once.

In addition, the convenient airway connection is also an important advantage, he said.

Da Nang is also famous worldwide for the Golden Bridge, which has attracted hordes of guests since it opened in the Ba Na Hills mountain resort near the city in June 2018, and two UNESCO World Heritage Sites - Hoi An Ancient Town and My Son Sanctuary.

The city is the second destination in Vietnam that emerges as dream wedding venues for Indian billionaires, following Phu Quoc Island off the southern province of Kien Giang.

In March, the first wedding of a billionaire Indian couple was held on Phu Quoc and lasted for a full week.

At least six other billionaire Indian couples have booked Phu Quoc to be the venue for their wedding ceremonies following the success of the first one.

“Da Nang in particular and Vietnam in general is rising as a highlight on the global map for Indian billionaires’ weddings,” said Ambassador Chau.